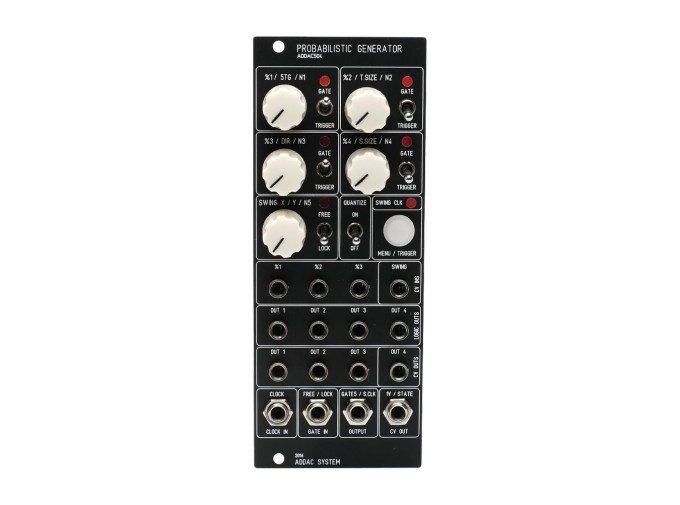 The ADDAC504 Probabilistic Generator is a complex random voltage and gate source fantastic for probabilistic triggering and modulation. It features five CV outputs and five gate outputs with a switch to select between triggers and gates.

The five channels have a knob that correspond to the gate and CV outputs. Each of the knobs has three functions, the first four knobs by default control the probability that the corresponding gate channel will be active. The probabilities for each of the gate outputs are linked, so when gate one has a 100% probability, none of the other gates will be active. Turning the probability down will allow the next gate channel to output based on its own probability settings. Setting all knobs to 50% probability (center knob position) will mean gate one will have a 50% chance, gate two has a 25% chance, gate three has a 12.5% chance, and gate four has a 6.25% chance of being output. The standard function of the fifth knob sets the swing X parameter from 1 to 16.

The secondary and tertiary knob functions can be selected by the menu/trigger button. Holding the button while moving the knob changes the secondary function, and holding the knob for three seconds edits the tertiary function. The first knob switches the fifth gate output from a trigger to a gate. The second knob sets global trigger length. The third knob sets the sequence playing direction; forwards, pendulum, or backwards. The fourth knob sets the locked sequence length up to 16 steps. The fifth knob sets the clock swing Y. The tertiary function of the knobs set the CV tuning to the corresponding CV channels.

The ADDAC504 features a lock switch and trigger input that can allow the gates to fire according to their probability or loop the last gates generated, up to 16-step patterns based on the fourth knob setting. The quantize switch sets if the CV outputs will be quantized or free. The “%” inputs allow for CV control of gates one, two, and three via CV. The swing CV input allows for the swing amount to be controlled externally. A jumper on the back of the modules outputs either the swung clock, or 1 v/state meaning the voltage can be one, two, three, four, or five volts when the corresponding gate is active.