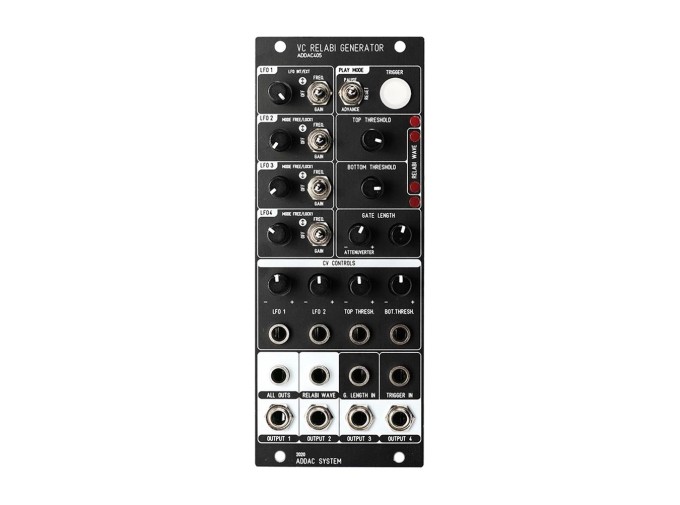 From ADDAC, the 405 Relabi Generator is a complex modulation source that uses a novel approach to signal generation. John Berndt first defined Relabi in a 2009 paper, saying, "Relabi, Def.: The experience of a palpably coordinated plurality of events that appears to be cyclical but simultaneously suspends identification of a uniform pattern, preventing a resolved sense of pulse. Relabi, therefore, seems equally pulsed and unpulsed at the same time. It is an experiential gestalt, a quality of experience, greater than the sum of its parts (it forms a sustained unity in experience, albeit of a new kind)."

Using this method, ADDAC created the 405, which functions as a CV and gate/trigger generator. Four sine wave LFOs feature a switch that selects between frequency, gain, and off, muting the LFO. LFOs 1 and 2 feature CV inputs, and LFOs 2, 3, and 4 feature the ability to sync to LFO 1. These four LFOs are combined to create a Relabi waveform, a +/-5V modulation source. The top and bottom threshold controls and CV inputs define the four outputs' behavior, with each output triggered when the Relabi wave goes above or below the thresholds. Control the outputs' overall gate length using the gate length control and CV input with a corresponding attenuverter. The All output fires a trigger signal whenever any of the four outputs becomes active. Three play modes define the behavior of the generators, pausing, syncing, or advancing them.

John Berndt posed the question in his paper, "Why would anyone want this Relabi experience? I maintain that much of what is exciting in musical forms involves an interplay between the setting up and denying of pulse expectations." ADDAC took this groundwork found in the paper and ran with it, creating a fully-featured module with advanced functionality.