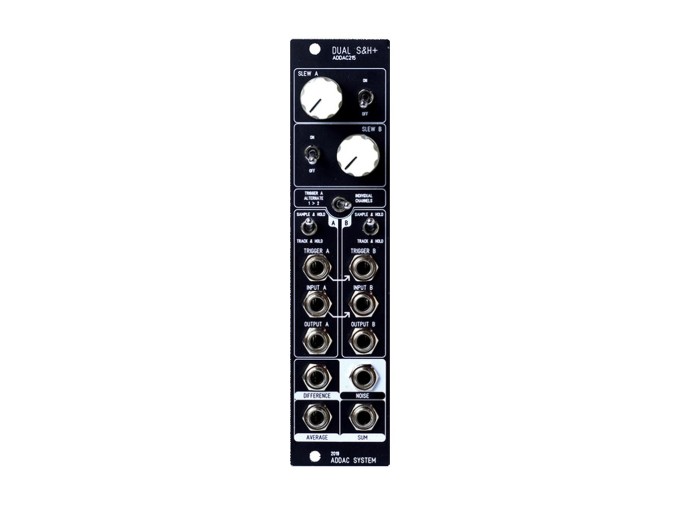 The ADDAC215 Dual S&H+ is a two-channel sample and hold module that packs in way more features than your standard random source. It's a great source of modulation that can be random or predictable, depending on how you use it.

ADDAC215 is comprised of two identical channels. They each feature a trigger input to clock the sample and hold and a sample input. A white noise source is normaled into both sample inputs, and also has its own dedicated output—so the ADDAC215 can easily be used as a stepped random voltage and noise source. It can also sample external signals, and features 0.01% maximum deviation from the input. This allows it to sample and hold quantized input signals without detuning or voltage drop over time.

ADDAC215 has two clocking modes: alternate, which alternates the clock signal from channel A to channel B everytime it receives a trigger signal, flip-flopping which channel changes (much like in the Buchla 266). The individual channel mode allows channel A and B to be clocked separately. While they can be clocked separately, trigger input A is normalled into trigger input B, causing both channels to change at the same time. With a cable present at the channel B trigger input this normalization is broken. The trigger inputs accept audio rate signals as well, allowing it to be used as a crude downsampler.

It can also be used as a track and hold. Track and hold means the signal present at the sample input, by default noise, is allowed to pass through to the output until it receives a gate signal. When it receives a gate signal, it will hold at the current voltage level until the voltage goes low. Each channel has a slew control which adds a sliding effect between voltage levels, which can be turned on and off by switch. In addition to the individual sample and hold outputs, there are three outputs derived from the two channels. Difference outputs channel A minus channel B and full wave rectifier the output to make the output always positive. Average is a mix between the two channels divided by two. Sum is simply a mix of the A and B output signals.

The ADDAC215 is a powerful modulation source that is versatile and fits into a wide range of applications.