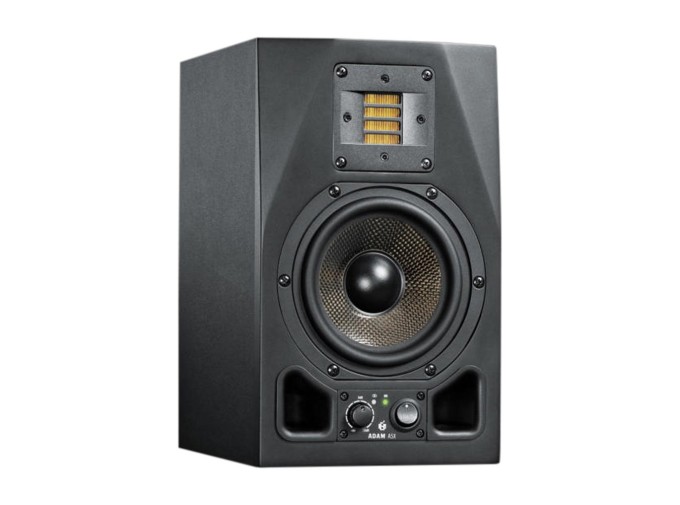 A wealth of truly outstanding reviews and many awards helped to establish the original A5 speaker as one "of the best small monitors" and a "great choice for the small studio." (Future Music, 01/2009). The similar dimensions and name could make one believe that the A5X is nothing more than a new version of the A5. A quick listening however leaves no doubt that the A5X is much more than that.

A 5.5" Midwoofer reproduces the frequencies below 2.5kHz. The diaphragm is made from Carbon fiber/Rohacell/Glass fiber, which is the same composite structure shared in the next two bigger models. This material with minimum weight and maximum rigidity prevents break up resonances, resulting in an outstanding dynamic behavior and impeccable sound characteristics.

A very handy and exclusive feature found in the two smaller AX monitors is the Stereolink. This is accomplished by a pair of additional RCA connections that allow for a bypass of the second stereo channel to the other speaker.

This new technology connects two A5X speakers in such a manner as to allow the user the option to control the overall stereo volume of the system from either speakers gain control. This makes the A5X a natural for "mixer-less" desktop applications where overall system volume needs to be adjusted easily.

The front of the A5X sports dual ports for surprisingly low frequency response down to 50Hz. The front panel also has power and gain controls. The rear panel includes a tweeter gain control as well as balanced (XLR) jacks and unbalanced (RCA) jacks, allowing for greater connection flexibility. There are also two M6 (6 mm) metric strew threads for stand/wall mounting.

The X-ART membrane consists of a pleated diaphragm in which the folds compress or expand according to the audio signal applied to them. The result is that air is drawn in and squeezed out, like the bellows of an accordion.

The ADAM X-ART design overcomes the piston-like motion of all conventional drivers and their inevitable problems by achieving an improvement in air loading by a factor of 4 over conventional transducers. To illustrate the basic principle by a comparison: When you breathe, your thorax is moving slowly whereas the air is moving comparably fast. Similarly, the X-ART diaphragm presses the air faster in or out of its folds than they themselves are moving. This markedly superior ”motor” is responsible for the unprecedented clarity and pristine transient reproduction that can be heard with the ADAM X-ART drive units.

In addition, the X-ART tweeter’s pleated membrane avoids the typical breakup/distortion and subsequent dynamic limiting at higher frequencies of stiffer voice coil designs, such as those found in dome and cone tweeters. Another positive result of the X-ART design is that the driving ”stripes” are in direct contact with the outer air and are cooled immediately.

PWM (Pulse Width Modulation) – sometimes referred to as Class D amplification, sometimes called Switching Amp Technology – converts the incoming signal to a series of rectangular waveforms of equal height. The width of the rectangles varies in time and the relation of the width of the rectangles represents the musical signal. This waveform can be amplified much more simply, as the transistors are not modulated anymore; instead they are used as switches that only turn the power supply voltage on and off.

It is possible that a very fast mechanical switch could do the job, but power transistors are a better choice for the task, so PWM amplifiers still work pretty much like conventional Class AB designs. It is important to note there are no bits and bytes involved, so “Digital Amplifier” is a misleading and inaccurate term.

The main advantage of PWM amplifiers is their extremely high efficiency (>90%). As a consequence the heat to be dissipated is only one fifth of earlier designs, leading to much lower temperatures within the amps and making the use of heat sinks obsolete.

This principle has been known for decades, but time was needed to develop units that perform at the leading edge in sonic reproduction quality and yet still maintain the high efficiency mentioned previously. The ADAM units use the new technology for both the amp and the power supply section (i.e. no more transformers) combined with state of the art input and filter sections to achieve the best in multi-channel active studio monitoring.