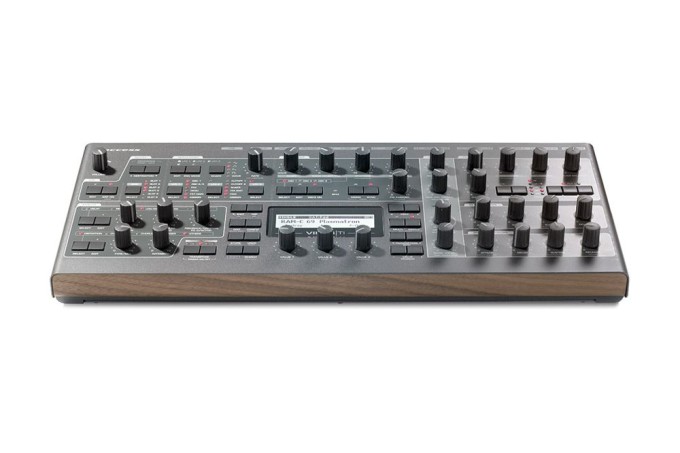 The Access Virus TI2 is a desktop synthesizer featuring 32 knobs and 43 buttons for intuitive audio manipulation. It boasts three oscillators, two separate filters, a 2D modulation matrix, FX, an arpeggiator, a surround sound output, and much more. The synthesizer boasts a dual DSP system with 80+ stereo voices. These powerful oscillator models consist of virtual analog, wavetable, hypersaw, and graintable oscillators. Additionally, the TI2 several filter models that emulate the character of vintage analog gear. There’s also an onboard ring shifter, a dozen FM types, and a tape delay—and that’s not even the FX section! Effects include per-part reverbs and delays that ensure similarity in both single and multi-mode operations.

On top of all that, the Access Virus TI2 features Total Integration, Access’s proprietary technology that bridges the Virus with a computer system to achieve a powerful union between the Virus TI2 and a virtual instrument plugin. The plug-in controls the Virus and receives audio, allowing users to post processing capabilities via their computer. Since the Virus calculates all the voices, using it in tandem with a computer significantly reduces the the latter’s CPU load, freeing it up for other tasks.

Additionally, the Virus TI2 allows for intuitive editing and features a dedicated librarian for indexing patches. There’s also an analog input that doubles as an audio interface, while the MIDI jacks can also double as a MIDI interface. This is the DESKTOP version of the Virus TI2. It does not include a keyboard.

This algorithmic sequencer is a great tool for generating playable, evolving tonal patterns, as well as Euclidian rhythms. In this short video Brian shows us a hybrid computer/hardware synth setup with the T-1—and its 16 simultaneous MIDI channels—at the heart of the composition.
Access Virus TI2 Desktop Virtual Analog Synthesizer Reviews
Register with :