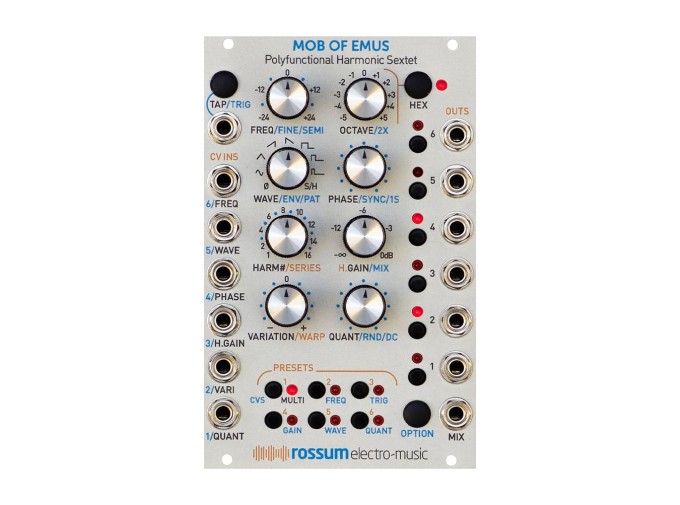 Poised as a multifunctional collection of six oscillators or modulation sources, Rossum's Mob of Emus offers an abundance of flexibility within a single module. While each of the six channels can effectively function with total independence from each other, Rossum certainly realized the value and creative potential of being able to synchronize timings and shift the values of each channel's parameters at once while maintaining their individual identities.

Mob of Emus has a set of eight shared controls, affecting individual channels via selector buttons. Each channel can operate over a range of ten octaves, covering the entire audible frequency range but being fully capable of LFOs and envelopes as well. While the Waveshape control does contain standard analog style waveforms, two other banks offer various envelope shapes and preset rhythmic patterns, fleshing out the capabilities of Mob of Emus beyond an audio source.

Things start to get interesting with the Phase control, allowing for compelling desynchronization of modulation sources or imparting interesting phase cancellation at audio rate. Fans of additive synthesis will enjoy the presence of the Harm# control, allowing each channel to have a frequency multiplier applied to it. While the obvious application of this control is for generating harmonically related oscillators, this control also applies to LFOs, envelopes, and rhythmic patterns, so it's a breeze to set up tempo synchronized modulations, polyrhythms, and more. The Quant control allows for each channel's output to be quantized to music scales, but additional options allow for random frequency variations or DC offset to be added when using the channel for something other than an audio-rate oscillator.

The flexibility of Mob of Emus becomes readily apparent upon activation of Hex Mode, which enables the controls to affect each channel on a macro level. Once each channel has been dialed in to your liking, Hex Mode allows for the parameters of each channel to shift on a global level, maintaining the relationships in frequencies and function per channel, thus allowing for global tempo shifts, quantization at the Mix output, master volume control, and more. Add in six assignable CV inputs and 12 presets, Mob of Emus is ready to be the six collective hearts and brains of your modular system.