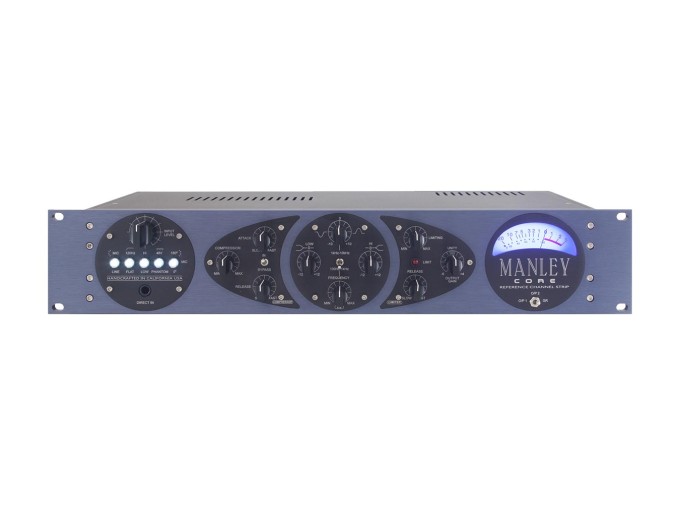 Manley's CORE is an all-in-one, tube channel strip for adding amplification, dynamics management, and frequency control to your studio, while also offering additional coloration for your signals. CORE features several sections of sonic contouring, including compression, EQ, and limiting, but its foundation starts with a fantastic and flexible preamplification section. Capable of supporting any variety of signal, the input section comes equipped with independent balanced XLR inputs for mic and line-level sources as well as a strong direct input, featuring an unbalanced 1/4" jack capable of handling impedances up to 10 MegOhms! While the microphone transformer is the only one affected by the phase inverter control, any input is followed by a fixed 120Hz 1-pole high pass filter meant to clean up any unwanted low end. From there, the CORE provides a highly flexible input level control, supplying up to +40dB or +60dB of gain to mic signals depending on the Low/Hi position while also acting as a variable pad to attenuate hotter signals.

The preamplification stage is followed by Manley's wonderful ELOP compressor found in their fantastic SLAM!, featuring a moderately ranged and variable set of attack and release controls. Easily fixable to meet a number of settings, the compressor sticks to a 3:1 ratio for impactful yet controllable amount of dynamic control before the rest of the signal chain. CORE's preamplification meets its end as it approaches the 12AX7 and 6922 White Follower vacuum tubes for high-voltage amplification. This all-triode design requires a high amount of voltage to both power and run these tubes, which is why Manley drives it with their very own POWER system, thus producing insanely high amounts of headroom. The amplification stage is followed by an insert point at which you can add any line-level gear to modify your signal before continuing down the path.

Manley's EQ section is a versatile yet simple three-band equalizer for carving out your lows, highs, and any specific mid areas that need some extra love. The low and high shelves offer +/-12dB of gain for adding or subtracting oomph and sizzle while the mid band features a fixed bell curve that can boost or carve up to +/-10dB with a sweepable center frequency from 100Hz-1kHz or even 1kHz-10kHz. While the EQ is great for adding simple or drastic lifts and cuts, the following "brickwall" limiter is an FET-based dynamic control for taming final transients and smoothing out your entire signal with a flexible release time. Additional output gain allows you to add up to 4dB or subtract down to 6dB to meet unity measures while still putting out a powerful sound at the main output. If you want to skip the EQ and Limiting section, you can alternatively use the direct output to go directly into the DAW or alternatively process your gear elsewhere before conversion.

Easily monitor and manage your levels via the brightly backlit VU meter, providing you views of the compressor's gain reduction, the direct output level, and the main output level. The Manley CORE provides a fantastic solution for artists, studio engineers, or anyone looking to add a flexible and reliable signal path for creating stellar recordings.