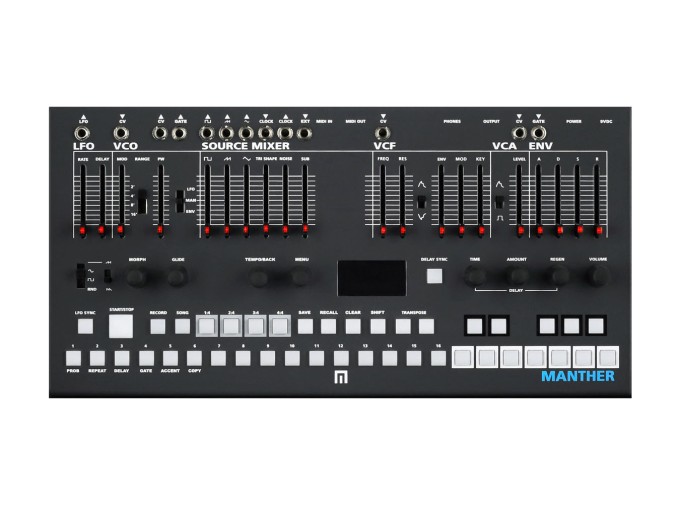 Manther is a desktop monosynth boasting an entirely analog signal path, a digital sequencer, and integrated delay effect. The beast derives much of its charm from its CEM3340 based IC and SSM2044 chips, which comprise the VCO and filter respectively. There's a source mixer that gives users optimal control over waveform, noise, and sub levels as well as individual outputs for each waveform.

The integrated 64-step sequencer enjoys automation across every primary feature. Users can program intricate movements and save all automation to any of the unit's 64 preset locations. These presets can be selected and deployed in any order for easy song creation.

When it comes to ease of use, Manther is the king of the jungle. Its impressive menu system provides deep control over essential features like envelope manipulation, sequence division and direction, sub semitones, LFO phase, clock parameters, and delay features. And if all that wasn't enough, Manther features inputs and outputs for CV, Clock, Gate, LFO, and MIDI—providing everything one would need to communicate with external modular synthesizers, especially those of the eurorack variety.

Specs
Product Demo Videos
Malekko Manther Sounds
The Malekko Manther is a standalone analog synthesizer with the ability to make sounds similar to single oscillator bass synths from the past as well as adding new features like a tunable sub-oscillator and wave-folder. The Manther also has a powerful sequencer with motion recording and a built in delay effect that goes from short chorus/flanger lengths all the way up to regular delay times. The Manther also has patch points for CV input and output compatible with eurorack synthesizers.
Manther From Another Panther (DFAM + Manther)
We paired the Malekko Manther mono-synth with the Moog DFAM on drums for this video. Since both of these synths have built in sequencers you can create a jam by just synching the two together. The Manter has SH-101 style architecture with extra features like a tunable sub oscillator, wave-folder and built in delay effect. The DFAM has two oscillators as well as a noise generator and Moog ladder filter. The DFAM features percussive envelopes and interesting routing options to make many different drum and synth sounds.
Malekko Heavy Industry Manther Analog Monosynth Reviews