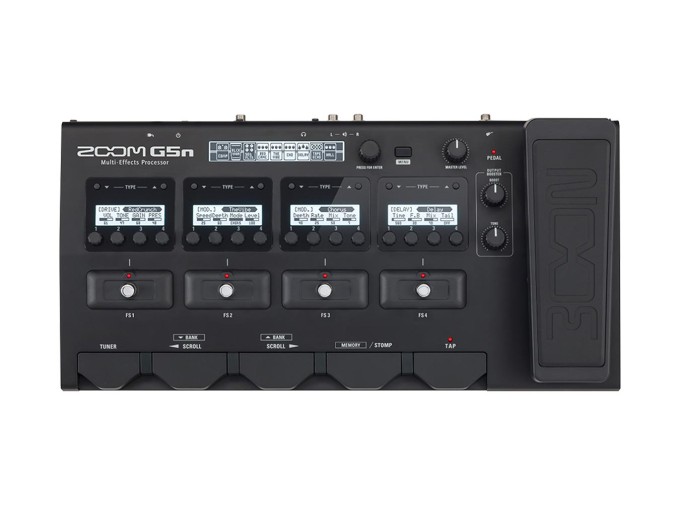 The Zoom G5n is a 24-bit multi-effects processor that brings together classic guitar tones and allows you to sculpt your own. It's perfect as your all-in-one effects solution, providing a vast array of effects types and styles.

The G5n faithfully recreates the signal chains of 100 guitarists whose tones are much sought after. These include the iconic sounds of Jimi Hendrix, Carlos Santana, and Led Zeppelin. There are 100 DSP effects including distortion, overdrive, chorus, phaser, reverb, EQ, and delay. Additionally, five amp and five cabinet emulations are available. There are 200 memory locations that include preset and user patches. It features a USB connector which allows you to save and load patches and also allows the G5n to act as an audio interface.

Up to nine effects can be used simultaneously and routed in any order. Four effects can be loaded into the four primary footswitch slots, each of which features a clear display and four knobs for adjusting parameters. The built-in expression pedal allows you to easily control effect parameters such as volume or tone. A second expression pedal can be connected to the control input. The tap tempo allows you to dial in the speed of time based effects.

An aux input allows you to play along with external sounds without running the audio through the effects path. The 68 built-in rhythms help with practicing or allow you to act as a one-person band, especially when used in conjunction with the looper. The looper allows for loop times up to 80 seconds, allowing you to lay down parts and play over them. The on-board chromatic tuner makes sure everything is in tune. The Zoom G5n packs in a ton of features and delivers where it matters most, with performance and an impressive range of tones.