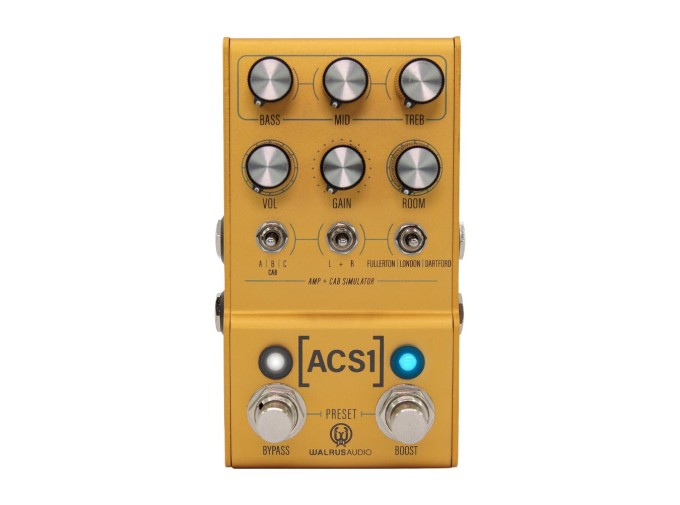 Packing the convincing sound of three classic amplifiers in the stereo capable Mako series package, Walrus Audio's ACS1 is an evocative, stereo amp and cabinet simulator that offers the feel and response of real amps. This entry in the Mako series offers a straightforward but highly flexible solution for stellar guitar tones on stage, in the studio, or at home.

ACS1 provides a trio of iconic amplifiers, named for their hometowns of Fullerton, London, and Dartford, and offer players instant access to some of the most recognized amps in electric guitar history. Walrus Audio has also passionately crafted six high quality cabinet impulse responses, offering distinct tonal flavors to each of the amp models. For further flexibility, users can also load up their favorite IRs via the dedicated web application developed by Walrus Audio just for this pedal.

Where the ACS1 shines is in its flexibility to excel in a wide range of setups. Thanks to its stereo inputs and outputs and the "L + R" switch, it's totally possible to configure different combinations of settings, amps, and cabinets to the left and right channels. Dial up one sound with the switch on L, then switch over to R and set up anything from a subtle variation of the other channel, to something totally and completely different to blend in. And when you need a unified stereo image, setting the switch to + will affect both sides equally.

All of the settings on ACS1 respond as one would expect on a real amplifier. Level and Gain are interactive with each other, and a three band EQ for sculpting tones is available as well. Need some extra gain for that killer solo? The Boost switch allows for alternate gain and level settings to be stored and accessible at the press of a switch. The Room control offers some magic of its own—at low settings the amp sounds as if it were being tracked in a totally isolated, reverb-less environment, but turning it up adds more of the natural presence of playing a live amp in a room.

Of course, like the other Mako series pedals, great sound is only part of the equation. Full MIDI control is available through the full-sized 5-pin DIN ports at the top of the pedal, and while three presets can be recalled from the pedal itself, external MIDI Program Change messages can recall up to 128 different presets for all your tonal needs. So whether you need high fidelity stereo amp modeling for your compact live pedalboard or a great sounding tool for practicing at home, turn to the ACS1 from Walrus Audio.