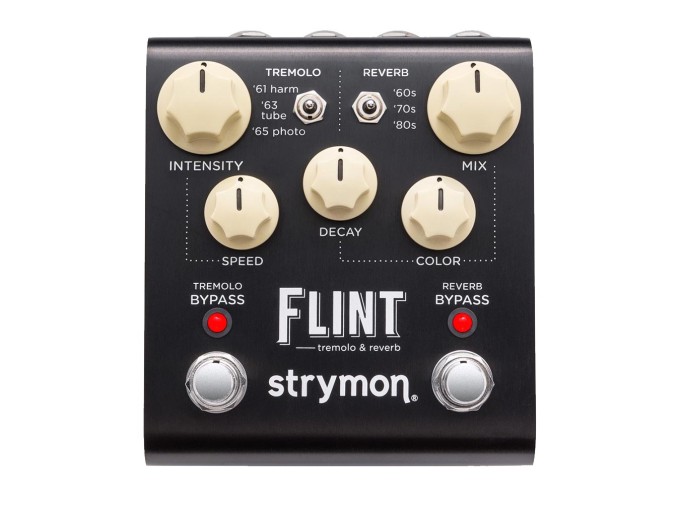 Strymon's Flint combines two of the most beloved effects into one, cohesive pedal: tremolo and reverb. A common combination of effects dating back to the guitar combo amplifiers of the 1960s, Flint aims to capture the magic of those cherished amps, but with more flexibility in a way that Strymon's DSP magic can easily deliver. The tremolo and reverb effects may be activated independently of each other, but plenty of retro-flavored washes can be achieved by using them together

For the tremolo side of Flint, Strymon offers the two most essential controls: Intensity—which determines how prominent the effect will be, and Speed—the rate of the tremolo. But, players have the option to choose between three different types of tremolo units. The '61 Harmonic Tremolo employs dual filters to fade between the high and low frequencies of your instrument, offering a unique flavor of tremolo that's a bit outside of the norm. For a more standard flavor, '63 Power Tube emulates the fluctuating bias gain of amplifier vacuum tubes, which also affects saturation and feel in a particularly organic way. Finally, '65 Photocell is based upon optical tremolo designs, which are notable for their characteristic waveform with a prominent, almost square wave LFO shape.

As for Flint's reverb section, it also has three different modes to choose from. With 60's Spring, 70's Electronic Plate, and '80s Hall Rack modes, there's a variety of ways to add space and dimension to your sound, shapeable by the Mix, Color, and Decay controls. But that's not the end of what Flint has to offer. With its secondary controls, it's possible to Boost or Cut the Tremolo and Reverb independently, as well as define the external Tap Tempo subdivision. Best of all, you can also determine the order of the two effects, whether it be Tremolo into Reverb, or Reverb into Tremolo. While it may be simpler than the Strumon flagship pedals, Flint proves you don't always need a million parameters to get great, characterful sounds out of your pedals.

Flint, from Strymon, is a combination Tremolo and Reverb pedal. The pairing of these two effects is one of the oldest pairings in audio processing history, with many combo amps built in the 1960's containing both of those effects. This can be heard in much of the early surf rock, as well as even in some western music as well. As the case with many of Strymons pedals, the Flint uses the complete processing power of the SHARC DSP chip to faithfully represent the coveted tremolos and reverbs. There are eight tweakable controls to dial in the perfect effect, from subtle to insane.