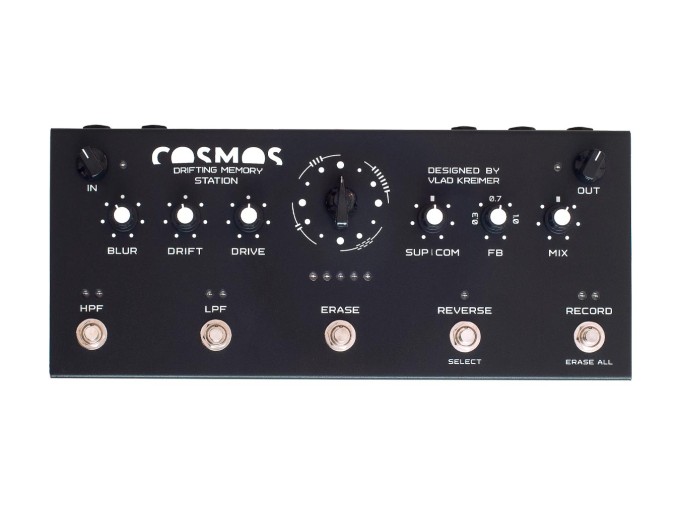 Cosmos from SOMA Laboratory is a sort of anti-looper that shifts and mangles your sounds over time. It does not offer clean, static looping but characterful and dynamic looping that evolves as you play and layer sounds. The design features inspiration from Brian Eno and Robert Fripp's work on Frippertronics and tape looping, with four algorithms that affect your sounds differently with creative and evocative stereo processing at 32-bit/48kHz. Delay comes in two forms, two delay lines or four delay lines, which each slide in relation to one another. The huge reverb simulates a massive imaginary hall, the bounds of which measure in the kilometer range, while granular mode offers an asynchronous granular looper that randomly scrubs through the memory buffer. Switching algorithms does not overwrite the audio in the buffer and does not cause clicks or dropouts.

The five footswitches give you direct, hands-free access to vital parameters, with each switch making use of crossfading between on and off states to provide smooth transitions. Quickly engage recording with the Record footswitch to capture audio in the buffer. Cosmos features both a high and low pass filter with three cutoff frequencies apiece, and the ability to reverse sections of the incoming audio with the Reverse switch. Drop out parts of the loop with a quick press of the Erase switch, or fully erase the buffer with a two-button press.

In addition to the footswitches, the knobs further shape the sound. Blur adds crossfeedback between delay lines, blurring, and smearing sounds, while Drift adds slow panning modulations, with individual panning for the delay lines. Make your loops crunchy with the Drive control that distorts and overdrives your audio. The Suppressor/Compressor knob does double duty, abruptly overwriting the audio buffer with new sounds and emphasizing softer sounds with auto-leveling. Simply put, Cosmos offers out of this world looping unlike any other pedal or effects processor on the planet.