After a campaign of cryptic social media posts and mysterious billboards, Novation has finally pulled back the curtain on AFX Station, designed together with none other than Aphex Twin. This limited edition version of the Bass Station II is equal parts collector's item and fully functional instrument for performers, restylized to focus on the incredible functionality of the 4.14 firmware, including the titular AFX Mode.

To mark the occasion, our good friend Enrique from Novation came over to work on the above video with us, showing us some excellent examples of sounds and functionality. We're also teaming up with Novation for another installment of our Perfect Patch Instagram contest series to give away an AFX Station! The entry deadline is 11:59PM Pacific Time on Wednesday, Novemeber 4th. Any synth setup is fair game for entry, so show us your best patch on your modular, polysynths, and quirky noise boxes.

But before we dive into the specifics of AFX Station, let's spend a moment thinking about what a collaboration like this represents, and the history behind Novation's iconic monosynth.

Where are the signature artist synthesizers?

Although we're certainly in the midst of a synthesizer renaissance, up until this point we really haven't seen too many substantial collaborations between instrument makers and notable electronic musicians. Compared to more traditional musical instrument industries such as those for guitars and effects pedals, "artist signature model" synthesizers are rather nonexistent. On one hand, this certainly might be as expected, due in part to the more technical nature and open-ended functionality of synths, samplers, and the like. Additionally, it's not uncommon to see artists develop sample packs or preset libraries as factory or supplemental content for some of the most widely used synths around. Honestly, thanks to the internet and a majority of instruments adhering to MIDI standards, it's easier than ever to work with the same sounds used by your favorite artists. 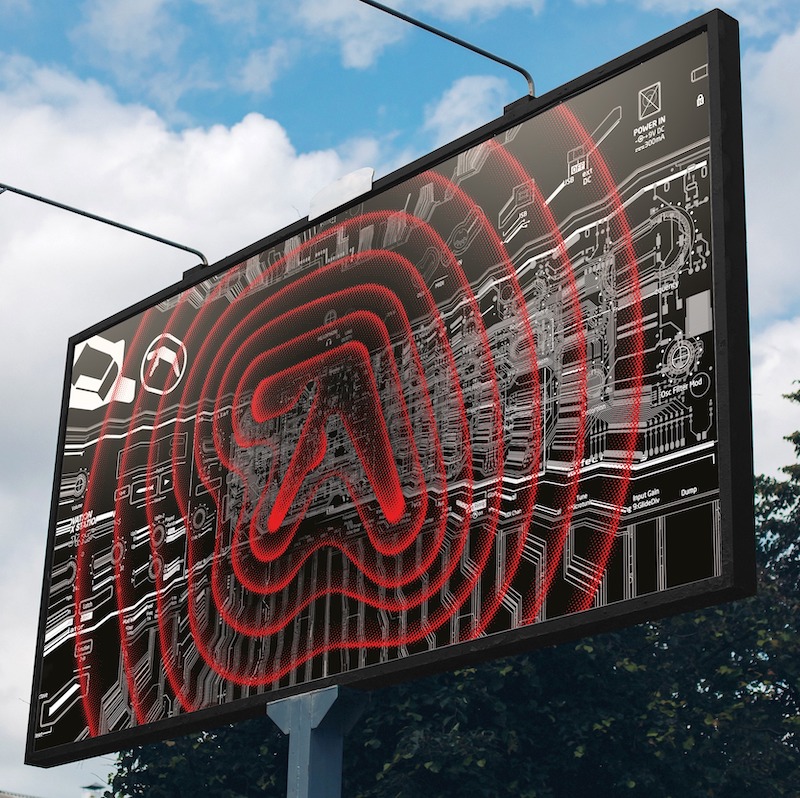 With that said, if there were any influential electronic musician out there to partner with a brand like Novation for a product release of this magnitude, Richard D. James, more widely known as Aphex Twin, would likely be among the first names that comes to mind. Hardly in need of introduction, James has been pushing the boundaries of electronic music for decades, running the full spectrum from the most serene ambient music to aggressive barrages of sound, and everywhere in between. James is also never one to shy away from adding in a healthy dose of experimentalism where needed, and draws from an extensive range of musical influences and a collection of instruments ranging from standard fare synthesizers and drum machines to computerized acoustic instruments and highly manipulated samples. Although generally preferring to live in a bit of mystery, he has been known to drop hints and tidbits about the equipment used to make various tracks over the years, which in tandem with his impressive discography demonstrates both breadth and depth of technical and musical knowledge. Given the level of his craft and aura of intrigue around his work, it comes as no surprise that Novation would want to collaborate with an artist of this caliber to revamp one of their most recognizable products.

This did not come straight out of the blue though—James previously worked with Korg on developing the microtuning capabilities and factory presets of their Monologue, and later with Novation on the aptly AFX Mode found in the 4.14 firmware for the Bass Station II. Now, they've revisited the iconic instrument once more, presenting us with the AFX Station.

The evolution of a modern monosynth

Both AFX Station and the Bass Station II represent a substantial reimagining of the original instrument from 1993, although it was always a fairly forward thinking instrument in each of its incarnations.

Indeed, while the first Bass Station was clearly a popular alternative for instruments like the Roland TB-303, it was also among the only analog synthesizers at the time to both receive and transmit MIDI Control Change data in realtime. As DAWs and MIDI sequencer programs were rising in both capability and popularity, the fact that you could easily record notes as well as knob turns was a game changer for a lot of musicians. For this reason, it was quickly adopted by many as a studio instrument, and subsequently led to the development of two rackmount variations: the appropriately named Bass Station Rack and the later Super Bass Station. Both added more sophisticated MIDI control and a higher number of presets, but it was the Super which added a sub-oscillator, ring modulation, and more versatile effects that vastly expanded the sonic identity of the series. Novation has additionally recognized the impact of the original by releasing a plugin version, faithful to its layout and sound set. 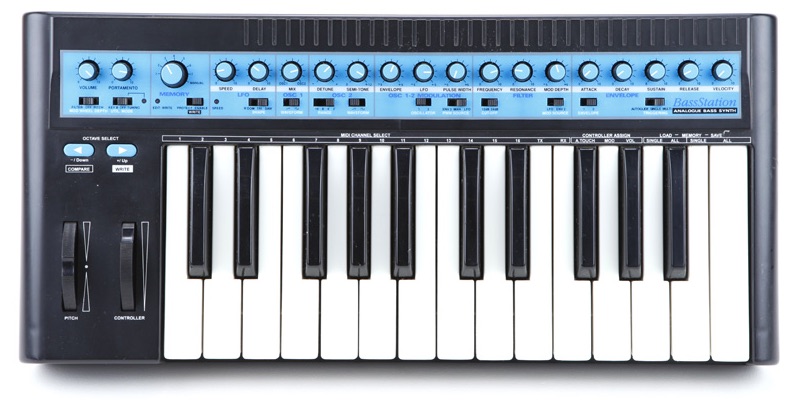 In 2013, we saw the release of the Bass Station II, a superb return to the original keyboard form factor without sacrificing the most essential functionality from its rackmount predecessors. In fact, Novation further enhanced the instrument, with highlights including additional filter types, built-in arpeggiator and sequencer, and eventually paraphonic functionality through a later firmware update. Like the original, this new Bass Station maintained a thoroughly developed digital control system for preset management and stability. This is an instrument that is still continually evolving—Novation has returned to their iconic instrument on a couple of occasions for firmware updates incorporating additional functionality.

The seeds for the development of AFX Station certainly began with the development of the version 4.14 firmware, undoubtedly named in reference to James' track "Avril 14th" and ultimately released on its titular date in 2019. To be approached by an artist of Aphex Twin's stature is one thing, but when they come with impressive ideas to enhance the functionality of your instrument, that's no small occasion. Novation seized the opportunity and worked closely with James to retool some Bass Station's core functionality to realize their collective vision. Thus, the aptly named AFX Mode was born. 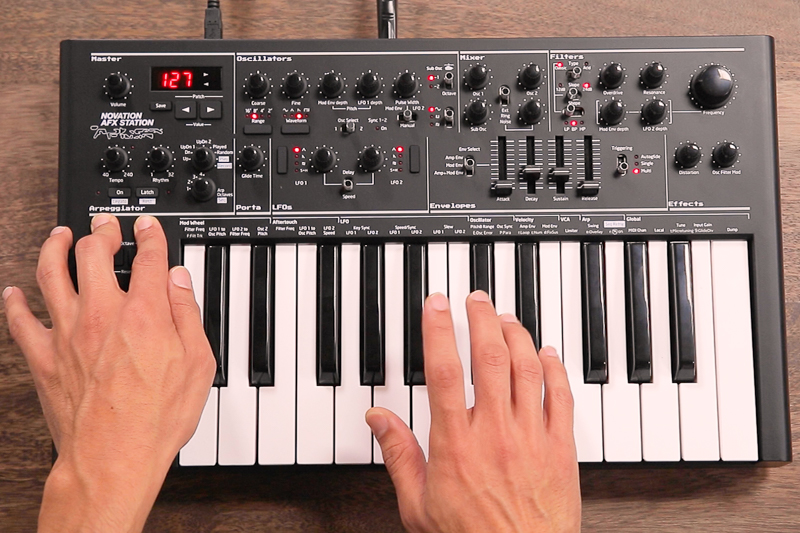 So what is AFX Mode? First, let's think about how an analog synthesizer handles preset management. Typically, an electronic instrument with presets like the Bass Station II keeps a handle on all the analog components of the instrument through digital control, benefitting both from increased stability and the ability to consistently recall exact settings. Ever since the advent of MIDI, it has become pretty common to automate preset navigation through the use of Program Change messages, whether for the purposes of printing external hardware synth patches into your DAW or changing programs throughout a performance.

AFX Mode expands on this idea in a rather clever way, utilizing note data to send instant parameter changes to nearly all aspects of the instrument on a per-note basis, through the use of overlay mappings. AFX Station (and the Bass Station II) has 25 keys, so that's 25 instant sounds at your fingertips, with up to eight overlays saved in the instrument. It's worth mentioning that overlays are saved separately from the normal patch presets, so any set of overlays can be applied to any patch with great effect. 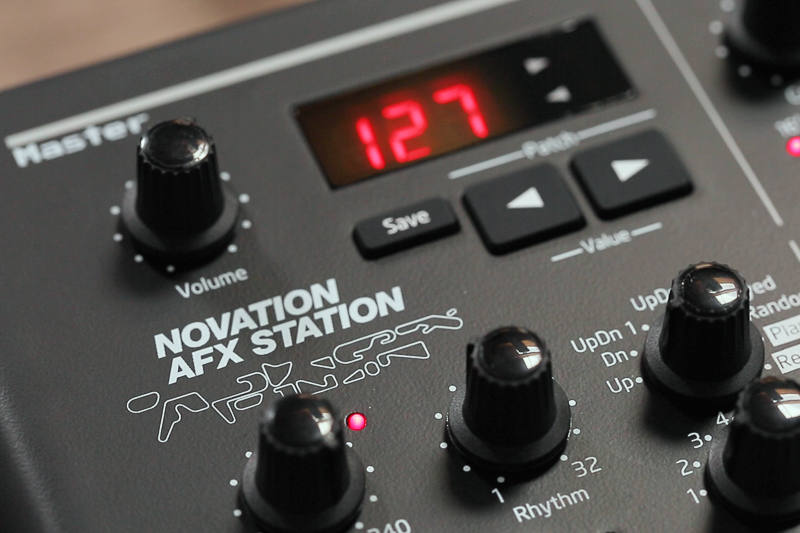 Through AFX Mode, it's suddenly easy to layout an instant bank of analog drum sounds, or combine any assortment of squelchy, bursts of noise for sound design or textural purposes. As you might guess, a huge creative benefit of using notes for this purpose rather than traditional Program Changes is the ability to combine AFX Mode with arpeggiators and sequencers. So even for an otherwise unassuming monosynth, this provides a drastic increase in the palette of sounds available at any given moment, and truly encourages a totally different thought process for playing a synthesizer on such a macro level. While there are certainly other ways to get similar functionality, such as the Multi Map feature on Elektron's Analog Four or simply spamming any old synth with program changes, nothing really competes with the immediacy and cohesion of AFX Mode.

It's worth quickly mentioning that while AFX Mode is perhaps the biggest highlight, it isn't the only addition in the 4.14 firmware. Notably, the sustain stage of both envelope generators may now be set to fixed durations, and the envelope retriggering feature introduced in the Bass Station II v2.5 firmware is supplemented by the ability to set the number of times the envelope loops. These features are a large contributing factor to why AFX Mode is so useful for dialing in drum patches—removing the need to always rely on the sustain aspect of a note and injecting sputtering flams from the retrigger feature add life and magic to percussive bursts and plucks. 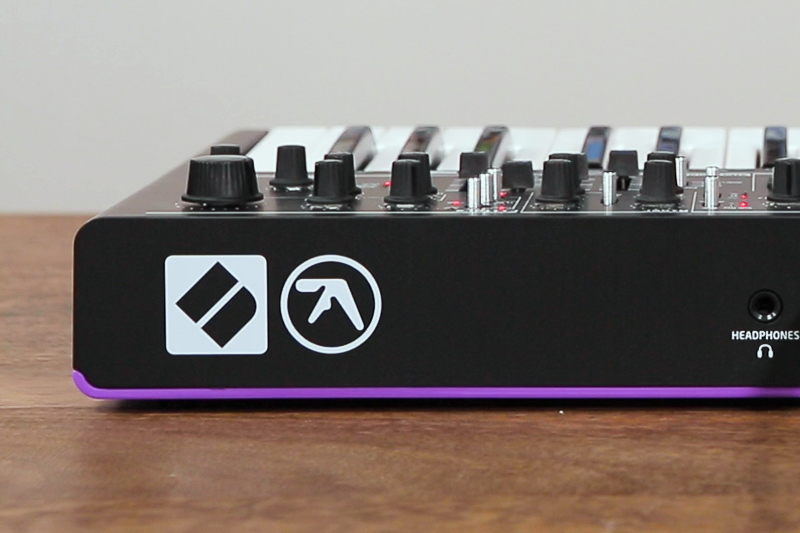 Although the two instruments are functionally identical, AFX Station offers a refreshing cosmetic update to the original Bass Station II. The labelling and text is much more subdued this time around, and much of the iconic blue of the original has been replaced with violet embellishments underneath the body and on the pitch and mod wheels. There's something to be said about how the way an instrument looks affects how it is played, so even switching over to a darker, moodier color palette might inform musical ideas differently. Practically speaking though, the opportunity to update the visual appearance of the synth allowed Novation to add in some key labelling for AFX Mode and some of the other 4.14 features, aiding in the demystification of a rather abstract way to think about playing an instrument.

Out of the box, the AFX Station is immediately ready to join you on wild sonic excursions, having the 4.14 firmware pre-installed. Novation has additionally taken great care in commemorating this instrument with a special box and artwork designed by Weirdcore, Aphex Twin's longtime visual collaborator, to complete this package of an exceptionally special synthesizer. Although there's nothing AFX Station can do that can't be done on the standard Bass Station II, an aesthetic refresh is always welcome, and we're sure that this joint endeavor will bring the instrument to the attention of some new audiences.

Of course, we're not only excited for AFX Station itself, but for the precedent it sets for collaborations between electronic instrument designers and artists. Only time will tell if we'll see further partnerships developing unique, compelling devices.