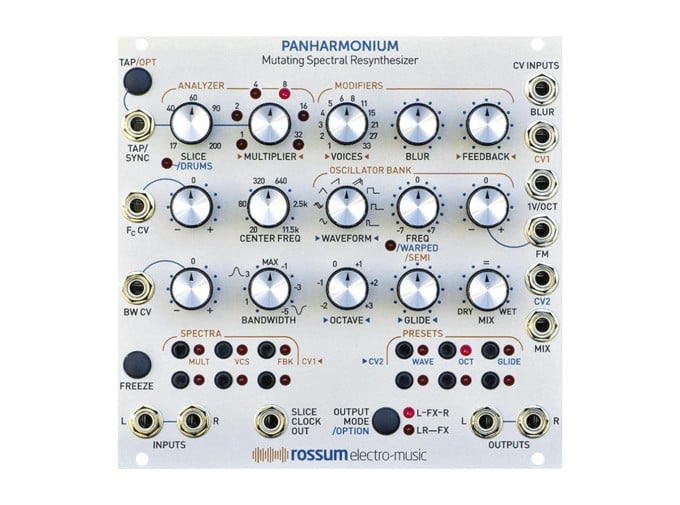 Rossum's Panharmonium is a Eurorack module in a class all its own: a Spectral Resynthesizer that uses an internal oscillator bank to recreate the harmonic structure of incoming audio—with plenty of potential for creating completely new sounds. By bringing the power of resynthesis to a realtime hardware format, Rossum has created one of the most singular Eurorack modules available to date.

The Panharmonium is based on the concept of resynthesis: an additive synthesis process based on the notion that recorded audio can be analyzed and then recreated by large banks of oscillators. Hardware implementations of this method have been approached only a small handful of times in the past, in such bizarre and powerful instruments as the New England Digital Synclavier and the Québécois oddity, the Technos Acxel—both of which were decidedly ahead of their time and now quite rare. By bringing this technique into a realtime format with a streamlined user interface, Rossum presents a truly new offering in a sea of oscillators, filters, and VCAs that all feel more or less the same as one another.

The Panharmonium's Analyzer section organizes incoming stereo audio into Spectra, whose boundaries are defined by periodic slices; once a slice completes, the captured Spectrum is used to define the frequency relationships in a bank of up to 33 internal oscillators. The slice period is user definable, and can be run at periodic intervals, at the rate of a tap clock, or at the rate defined by an external clock or CV. By using the Center Freq, Low Freq, and Bandwidth controls, one can determine which spectral region is analyzed, honing in on wider or narrow ranges of frequencies in the analyzed audio. The current spectrum can also be frozen with a dedicated Freeze button, turning the module into a self-sustaining sound source all its own.

The oscillator bank itself offers variable waveshape—including standard sine, triangle, saw, and pulse shapes as well as special crossfading waveshapes. This is a powerful contrast to traditional resynthesis, which tends to focus instead on using sine waves in order to create a clean translation of the incoming signal—but of course, this module is more about creating new sounds than emulating existing ones. The oscillator bank offers FM, macro tuning, and glide controls, as well as a mix between the wet and dry signals.

The Modifers section provides variable control for the number of oscillators used for resynthesis, as well as Blur and Feedback controls. Blur applies a smearing effect between Spectra, and the Feedback control introduces the resynthesized output back to the input, creating cascading transformations that evolve with each slice cycle.

And of course, the module offers internal memory: both memory for individual spectra and for global presets, making it possible to recall the doubtless many peculiar and inspiring sounds that it produces. Bringing a completely new approach to Eurorack synthesizers, the Panharmonium is nothing short of remarkable.