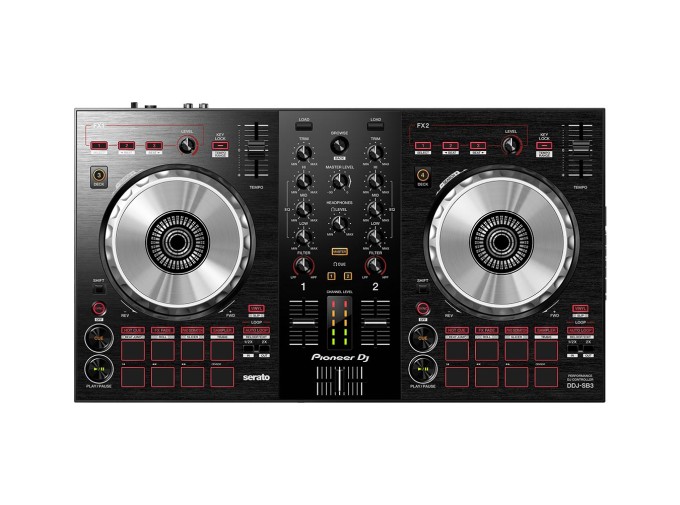 The Pioneer DDJ-SB3 is a two-channel DJ controller that's great as an intro to DJing. It uses the Serato DJ software—either the free Lite version, or the Pro version, which unlocks additional functions. The two high-quality seven-inch platters allow for scratching, nudging, or seeking within the track. The two mixer channels feature a master crossfader, volume faders, VU meters, trim, three-band EQ, and a continuous lowpass/highpass filter on one knob.

At the top of the unit, three effects buttons can be used to turn on and off effects, these include low pass filter, high pass filter, flanger, echo, reverb, and phaser. The effects are post fader, meaning fading out the volume of a track while using an effect like an echo won't fade out with the fader, but naturally fade away. An internal LFO is available to modulate the effects and is synced to the track BPM. It can be used to evolve and change the effect over beats or bars.

The pads perform functions based on the mode you're in. Modes include hot cue, FX fade, pad scratch, sampler, and transform. The beat jump, roll, and slicer functions are available with the full version of Serato DJ software. The pad scratch mode was produced in collaboration with DJ Jazzy Jeff. It allows you to play back scratch effects with the touch of a button. It's great for DJs who are just getting into scratching who want help practicing more complex scratching patterns. The sampler puts samples into four sample slots on the software that are played back at the press on the pads. The trans mode adds a tremolo effect to the played back audio. The hot cue mode sets points in the track and assigns them to the four pads. Pressing a pad will jump to that part of the track.

The DDJ-SB3 is a great way to get into DJing and provides tools to get you started. It's fun and while you can dig into the functions, it provides immediate results.