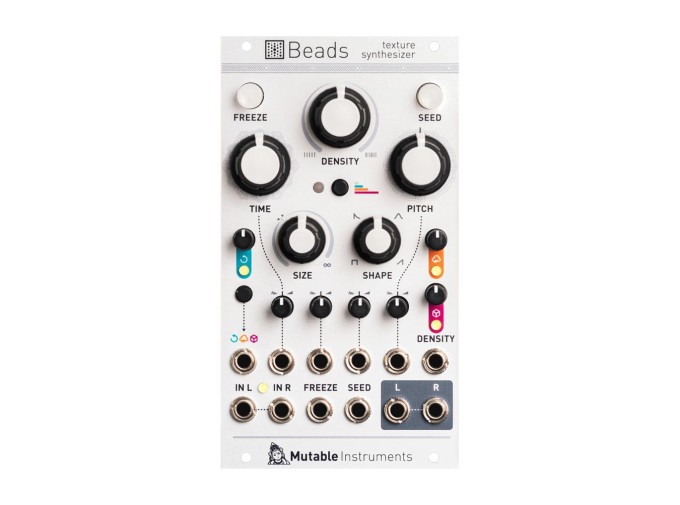 The Clouds clear, and a new day is upon us: Mutable Instruments is back with the successor to their highly sought-after Clouds texture synthesizer, Beads. Beads's theoretical approach remains the same—it is a real-time granular processor, but the improvements over the original module are vast. Higher audio quality, improved interpolation and anti-aliasing, longer buffer, and a faster DSP sampling rate make this a worthy successor.

Mutable Instruments did away with the onboard menu system, bringing all controls directly to the faceplate, letting you focus on the module and not on the menu. The recording time ranges from 4 seconds at 48kHz/16-bit stereo to 32 seconds (24kHz µ-law, mono). The recording rate features a corresponding button that sets the quality. These include the Sunny Tape mode that runs cleanly at 48kHz, Scorched Cassette mode that emulates wow and flutter, or a Cold Digital mode that accurately recreates Clouds' character.

Beads features four primary grain parameters. These are time (the position within the buffer), size (the grain size from .03–4 seconds, plus direction—forward or backward), pitch (with 1V/oct tracking), and shape (the grain envelope shape, which morphs between rectangular, snappy decay, smooth bell, or reversed envelope). Density sets the grain density, rate of generation, and repetition rate, depending on the mode. Freeze locks the audio currently in the buffer and loops it, allowing you to get down and dirty with the sonic details of your sound.

The four granular parameters include CV inputs that feature attenurandomizers. Attenurandomizers add internal gaussian randomization without the need for additional modules. The module reads the state of the parameters and respective modulation once per grain, meaning any changes that occur during a grain's playback will affect the next grain generated.

Beads functions in three granular modes. The latched mode provides real-time and continuous granularization of incoming audio with a periodic or random rate that tracks incoming 1V/oct signals. Gated mode fires off a burst of grains when the seed button is pressed or with an external gate signal. Clocked mode tracks in an incoming clock signal and runs at a division or randomization of that clock speed. Without an audio input, Beads will granularize the internal eight banks of wavetables. Beads also operates as a delay or beat slicer when set to an infinite grain length. In delay mode, density controls the base delay clock rate while time controls the multiplication with optional random delay taps. The tempo features tap tempo from either the seed button or external gate signal.

Beads represents a new shift in audio processing. The character, texture, and behavior are all magnificent. The internal random brings much-needed movement to the module that animates your sounds, bringing new life and depth to even the most static of input sources. Beads builds upon Clouds's legacy, updating the architecture with new technology and experience.

Related ArticlesExploring Effects Pedal Signal ChainsThe Rules of Pedal Chain Order...and How to Break ThemEurorack Modular Power BasicsEverything You Need to Know About Power SuppliesPolyphonic Modular Synth: Modern ApproachesFrom Chord Oscillators to Physical ModelingMutable Instruments BeadsGillet's Classic Clouds Concept RefinedWeird FX: Pitch Shifted DelaysArpeggiated Echoes, Microshift Chorus, and Swirling CacophonyAn Interview with Squash & BiscuitDiscussing Sound Design & New Album Lavender EggplantStaff Picks: Best Synths + Modular GearOur Favorite New Gear in 2021
Product Demo Videos
Mutable Instruments Beads - Eurorack Granular Processor + More
Wes and Jacob explore a few patches with the Mutable Instruments Beads. We were excited to get our hands on this new module that takes combines some of the best parts of Clouds with some new features that make it even better.
Best Gear of the Year : Part One : Staff Picks
It's been a massive year for hardware instruments, modular synthesizers and as we approach the end of this year we've decided to take a look back at some of our favorite new synths, modules, and more!

In part one of this series we asked the crew in the office what they were most excited to see arrive in 2021 in the category of synthesizers and modules!

Sound Design on Modular Synths for Animation with Squash & Biscuit
Join Squash & Biscuit—Shuwen Zhao and Brian Griffith—as they walk through their process for creating sounds for animation. In this video, they take a short clip of an animation they're working on and create a foundation for a fleshy monster sound. They also take us on a strange, improvised journey with a live performance. Check out their interview on Signal where they talk about their latest album, Lavender Eggplant.
Mutable Instruments Beads Texture Synthesizer Reviews