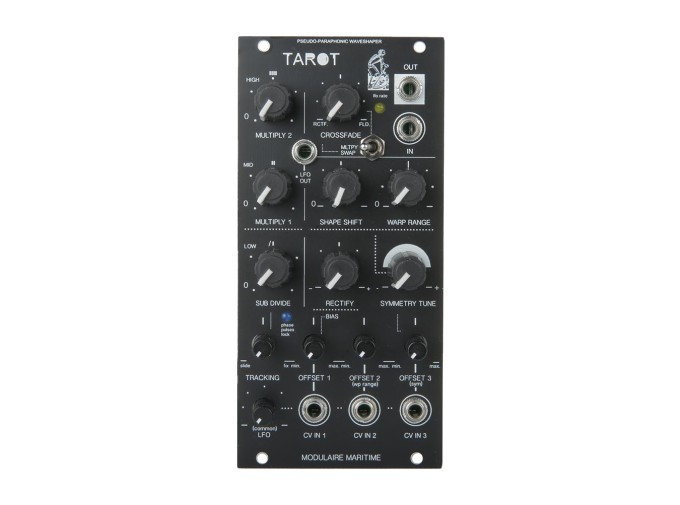 Add complexity and uniqueness to your sound with Modulaire Maritime's Tarot, a multi-waveshaping module with pseudo-paraphonic properties to get morphing, multi-layered timbres. Working with just a single source of audio, Tarot can add up to three different forms of waveshaping: rectification, wave-folding, and multiplication/division. Rectification, a commonly chopped wave effect, can be applied positively or negatively via the bias attenuverter, and said attenuverter can also determine the direction of modulation applied to the rectify control. Offering two different flavors of wave-folding, Tarot can apply either or both to give off some interesting harmonic content with a symmetry tune parameter shaping both to bias which direction the wave-folding sits.

The second wave folder and symmetry each have CV inputs with attenuators for creating deep and hyper-complex waveshapes that breathe and move. If you don't have a modulation source, fret not for the Tarot features a triangle LFO normalled to all CV inputs for subtle phasing to chorus-like effects, and you can utilize the LFO throughout your patch via the independent output. The final stage of waveshaping comes in the form of two wave multipliers and a divider, where each of which produces a unique "staircase" waveform with set math and volume to control their balance. All of these follow the path of a phase locked loop and determine their pitch tracking based upon the tracking control, in which it can go from a stable fixed note to note all the way to a slidey glissando that adds more dissonance and slewed movement. In addition to the PLL, the range only stretches five octaves of pitch tracking that is indicated by the blue "phase pulses lock" LED and will change if you start reaching outside the tracking range.

Before your mad creation of complex audio manipulation moves forward, the final blend of waveshaping is determined via the crossfade scontrol, in which you can blend between full rectification, full folding or somewhere in between. Additionally, the frequency section of multiplication and division can determine whether it's stronger on one side or the other via the mtply swap switch. Offering independent yet collaborative processing in a tightly packed module, the Tarot from Modulaire Maritime can add loads of desirable sonic complexity to your signals.