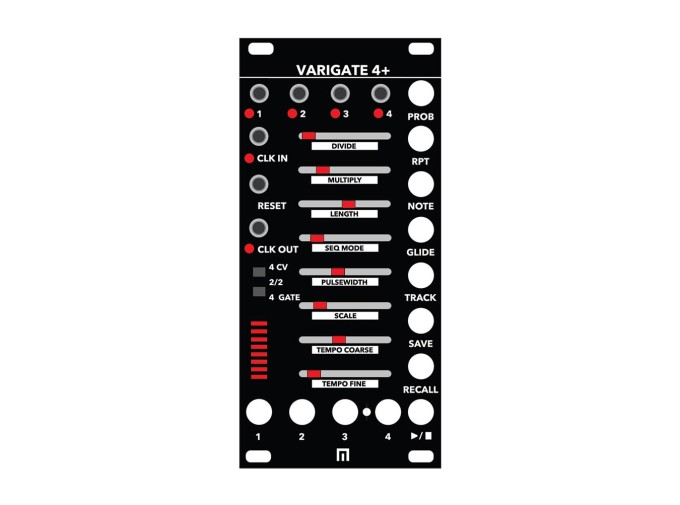 Its interface uses sliders to set parameters, with greater values to the right and lower values to the left. The prob button lets you control the probability that a gate will fire when the sequencer reaches that step. All the way right, the step will always get played, all the way to the left, the step will never be played. In the middle, there is a varying chance the step will be played. Rpt, or repeat is a ratcheting effect, repeating the notes of a step a specified number of times, up to eight repeats per step. This is perfect for rolls and flams.

The CV sequencer features the ability to quantize the CV outputs to one of eight scales, which include unquantized, major pentatonic, minor pentatonic, blues, dorian, minor, major, and chromatic. Moving the slider on a step will change the CV value of that step with notes indicated by the LED graph. The glide button allows you to add glide, or a smooth transition between steps notes, which you can set per step. Repeat, note, and glide settings can also be randomized, adding further variation to your patterns.

Track mode allows you to alter the functions labeled under the sliders. You can set divisions or multiplications of the internal or external clock. The sequencer can be set to play forward, reverse, pendulum, and random which randomly plays steps. Sequence lengths can be set from a single step up to eight steps. The pulse width affects the global width of the gate signals and can go from super narrow pulses to long gates. The internal clock ranges from 30-225 BPM with coarse and fine control of tempo. It can also be clocked externally and also has a reset input to reset the sequence back to step one using external signals. It can be used to sync to or sync from the Voltage Block using the normalled connection on Eurorack power buses, expanding both of their sequencing capabilities. Up to sixteen patterns can be saved in four groups of four patterns. The Varigate 4+ is a fantastic sequencer, packed full of features that make it powerful and versatile and can fit into any patch.