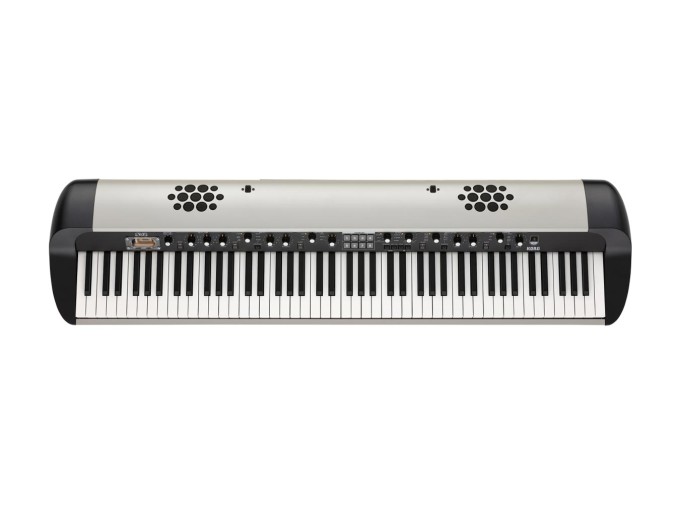 The 88-key version of the Korg SV-2S Stage Vintage piano is a performance keyboard designed with traditionally trained piano players in mind, providing a comfortable and familiar feel, but still offering plenty of sounds and performance features. A total of 128 voices of polyphony allow players to split and layer any of the 72 on-board sounds in nearly any way they need, not only including high quality acoustic and electric piano sounds, but strings, synths, organs, and more as well.

Korg took special care in designing the feel of the RH3 keybed used in the SV-2S, ensuring satisfactory similarities to the feel of a real grand piano. Like its acoustic counterpart, the keyboard of the SV-2S feels heavier in the low ranges, and gradually lightens up as you move up the keyboard. Players can also opt to change the velocity response of the keybed, to further match the response of the sounds to their individual playing style.

Aside from including a wide range of sounds beyond the scope of traditional pianos, the SV-2S includes six audio processing sections, to layer several studio-quality effects into any sound setting. The effects include guitar amps, compressors, three-band EQ, chorus, delays, reverbs, and many more, as well as including Korg's Valve Reactor circuit, which utilizes a real 12AX7A tube for adding analog warmth and saturation. Specifically for the SV-2S, Korg partnered with K-ARRAY to design great sounding built-in speakers, making the SV-2S further capable of practice at home, or with small groups such as choirs, dance classes, and more.

More than just a causal update to Korg's highly regarded SV-1, the SV-2S is a contemporary stage piano offering new levels of capability for expression and performance.