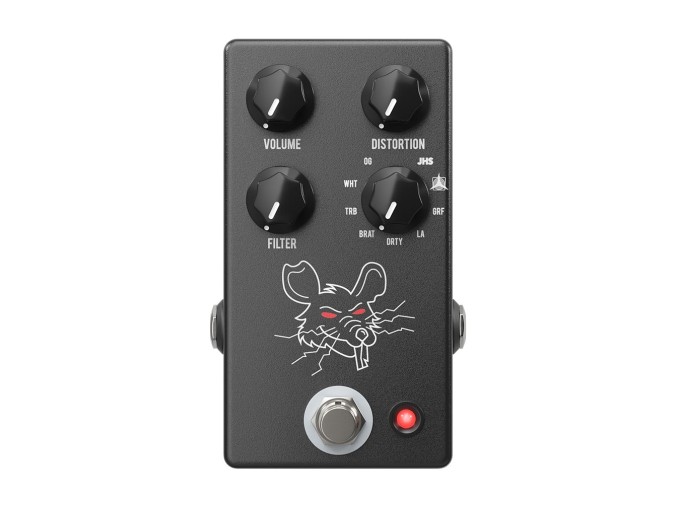 JHS Pedals has made the holy grail of distortion into one multi-mode pedal: PackRat, a nine-mode RAT recreation that provides the grit, texture, and loudness found in music since the late 1970s. Following their previous multi-mode pedals, Muffuletta and Bonsai, PackRat crams the power behind over 40 years of RAT pedals into a four-control pedal. These controls include overall volume of your affected signal, the amount of distortion you're applying, a low-pass filter, and a nine-position mode selector. Each of PackRat's historical and reinvented modes consist of all-analog circuitry, including multiple styles of clipping, different capacitor values, and plenty of other features that are true to the original circuitry.

In the first five modes, we have a chronicle of the most sought after ProCo RAT pedals, from its origins in the late 1970s all the way to the early 2000s. PackRat's first mode, OG, harkens back to the very first iteration, bringing the classic sound of symmetrical hard clipping via silicon diodes—this sound is harsh, high-gain, and loaded with harmonics. The WHT mode captures the mid-1980s White Face RAT's sonic profile, providing the same silicon diode girth as the OG with a different tapering filter flavor. The late-1980s brings a change in how the symmetrical hard clipping performs, and in turn, changes the characteristic of how the distortion sounds. These changes can be heard in the TRB, or Turbo, setting, swapping silicon diodes for LEDs for a more dynamic range, from slight overdrives to extreme hard clipping.

Continuing the ProCo line of RATs, we have the BRAT mode that mimics the style of the late 1990s grunge aesthetic, adding an input buffer circuit and soft clipping for an even wider range of distortion tones. The inversion of the BRAT modes tapered filter control, much like the original V1 had, and some capacitor changes modify the frequency response and sonic attributes. The final ProCo inspired mode, DRTY, is modeled after the famed "You Dirty RAT" pedal that succeeded the Deucetone 2-in-1 RAT pedal. Offering loud and heavy tones, the germanium diodes in the symmetrical hard clipping circuit section of the DRTY mode makes it the most saturated and hard-clipped of the ProCo bunch.

The succeeding four modes are tonal replicas of different takes and modded versions of original ProCo RAT pedals. The LA mode takes a swing back to the mid-1980s when Ibanez made a series of RAT style pedals known as the "10 Series," and the odd one of the bunch, "LA Metal," took a hard left turn by adding NO clipping diodes—instead, distortion comes from overlapping/"clipping the rails" of the opamp! The next two modes include GRF mode, capturing the John Landgraff's "MO'D" pedal that sounds like a RAT's cousin…four times removed...and the Caroline mode is a replica of a modded RAT from the boutique Caroline Guitar Company.

We close out on the JHS mode—the reason why JHS even attempted this pedal—based on a personal mod on a RAT pedal bought back in 2007. This circuitry mod can be seen in pedals such as the discontinued JHS All American and tons of modded RATs JHS did from 2008 to 2018. So whether you're an avid fan that has gone through the whole gambit of RAT pedals or are just looking to add a variety of genre-shaping distortions to your pedal arsenal, PackRat from JHS is the faithful, analog recreation you've been looking for.