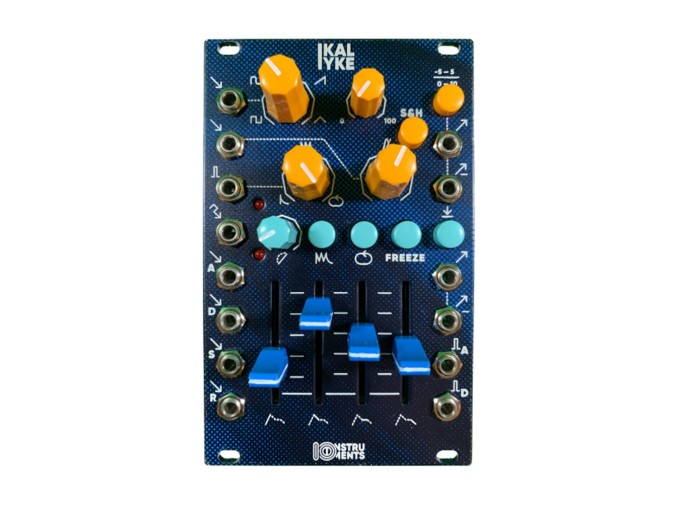 Design flexible envelopes and morphing LFOs with IO Instruments' Kalyke, a dual function generator for sculpting modulation signals and adding depth to your modular system. Each generator features both regular and inverse CV outputs for opposing modulation or even side-chaining, and the LFO can set its range to fully positive or bipolar over 10 volts. Kalyke also injects intertwining modulation with a manual trigger/reset button that activates both functions as well as an attenuator for influencing the LFO's amplitude via the shape of the envelope.

Looking at these two functions separately, Kalyke's LFO is a variable-waveshape modulator featuring all your basic shapes that blend between one another, including square, sine, ramp, and triangle. Not only can the shape be modulated, but Kalyke's LFO can sync to external clocking for in-time modulation. For more stepped and random-esque modulation, you can engage Kalyke's sample and hold function, and the LFOs rate ranges 0.25Hz all the way up to 256Hz with CV input for audio-rate modulation. Additionally, the LFO can be reset externally for alternate-style syncing as well as a repeat functionality to the reset for up to fourteen repeats or even indefinitely looping.

Moving to the envelope, Kaylke features a traditional ADSR architecture with loads of expanded functionality. Each stage of the envelope can be CV modulated for morphing envelope times and shapes, and the curvature of the envelope is dictated by the Curve control to blend between exponential and linear shapes. The attack portion of Kaylke's envelope can be ratcheted up to 16 different ways for a variety of snappy and jumbling envelopes, while the loop functionality loops the full envelope for unipolar, complex LFO-like modulation. With end of stage trigger outputs and envelope freeze functionality, the Kalyke is a beast of a modulation source ready to add dimension to your Eurorack system.