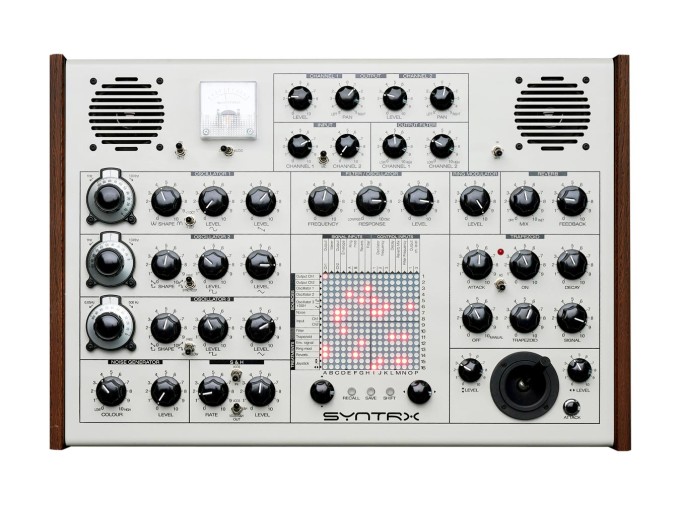 Although inspired by the interface of the EMS Synthi A, the Syntrx from Erica Synths is an entirely new synthesizer, developed from the ground up. In lieu of patch cables to make connections between the modules, a digitally controlled patch bay has been implemented, allowing all the advantages of a modular synth with the added bonus of preset patch memory.

The 16 x 16 LED matrix features the inputs and outputs from each of the modules in the Syntrx. Two knobs are used to move through the X and Y coordinates of the matrix, and a connection is made by depressing the encoder. The right encoder turns the connections on or off, while the left encoder has options for attenuated connections. Pressing once will make a connection with a gain of 1, 0.7 with a second press, 0.3 with the third press, and off with the fourth. Patch presets can be saved and loaded, allowing the Syntrx to function in a myriad of ways that can be switched through easily.

Syntrx is a three-oscillator synthesizer, with VCOs that track great over eight octaves and are incredibly accurate. VCO 1 has an octave switch to quickly transpose, while VCO2 has the ability to sync to VCO1 via switch. VCO 1 and 2 both feature wave shaping and level knobs to control the level of the two wave shapes—sine and sawtooth for VCO1 and pulse and variable sawtooth/triangle for VCO2. VCO3 is an audio oscillator a sub-audio LFO that is functionally similar to VCO2, creating variable sawtooth/triangle and pulse waveforms from 0.05Hz–500Hz. The Filter/oscillator is a resonant low pass filter, that, as its name implies, self-oscillates when the resonance is turned up high enough. It creates a sine wave oscillation, but does not accurately track 1V/oct. The onboard ring modulator provides a unique flavor of amplitude modulation by multiplying two signals together. It allows you to create complex harmonics and bell-like tones. If used with a microphone at the external input and an oscillator at the other input, it creates robot speech tones, reminiscent of Daleks from Doctor Who. Two external inputs are available, each with their own level controls and a switch to select input level. This can be either line level or microphone level, which also is recommended for signals coming directly from a guitar.

An onboard zener diode-based noise generator provides full spectrum white noise, with adjustable colour control. This skews the noise color from low frequency to high frequency with flat white noise in the middle. In addition to the noise color, the noise level can also be manually adjusted. Both the noise output and triangle/sawtooth waveform from VCO3 can be selected for voltage sources for the sample and hold section. White noise will result in stepped random voltages, while the triangle/sawtooth waveform will result in a stair-stepped output. The overall level can also be controlled, useful in dialing in subtle changes. A three-position switch selects the source for the matrix, triangle/sawooth from VCO3, sample and hold output, or a mix of the two for a complex random signal.

The envelope generator is a unique, looping trapezoidal design, called fittingly enough, Trapezoid. It features four main envelope controls: attack, on, decay, and off. On specifies the hold time, while off determines the time between cycles. By default, with the off control below 9, the envelope will loop at a contour specified by the controls. The On and Off switches have no effect when the envelope is set to the AD mode, which causes the envelope to rise and fall based on the attack and decay controls. The decay portion of the envelope can be voltage controlled via the matrix. If the looping is turned off, the envelope can be initialized with a gate signal via external gate input, with external MIDI controller, or with the manual push button located near the joystick. Control the overall output level of the Trapezoid with the trapezoid knob. In addition to an envelope generator, the Trapezoid section features a built-in VCA. Audio can be routed through it using the matrix with the overall contour of the envelope shaping the loudness of the input signal.

The joystick acts as a dual bipolar CV source, with the overall voltage range of these two signals set by the two level controls. The maximum range of +/-5V and can be used for modulating oscillator pitch, filter cutoff, or anything else you may want gestural control over. User defined MIDI CC messages can also be summed with the one of the axes of the joystick voltage, opening up additional control possibilities.

The spring reverb is an actual physical spring, not a digital emulation. The feedback is achieved through feeding the wet reverb signal back into the reverb input. This can be controlled by the dry/wet mix. It is susceptible to mechanical vibrations and noise, including the onboard speakers, so tailoring your sound levels may be necessary to achieve a clean recording. Or of course, you can hit the Syntrx and listen to the spring move for far out crunchy noises. Before passing to the output jacks, headphone jack, and internal speakers, the audio comes to the output stage. The two channels each feature level controls, as well as panning, plus an output filter. With the output filter in the middle, the result is a flat sound, turning it clockwise highlights the high frequencies, while counterclockwise boosts lower frequencies.

Syntrx can be controlled via external sources from MIDI and CV/gate, both available on the rear of the unit. It receives MIDI note note on, mod wheel, pitch wheel, and two configurable MIDI CC messages. The gate input is automatically routed to the trapezoid input, while CV input 1 is connected to all three oscillators. VCO2 can also be controlled by a separate CV input at CV2 input, allowing for paraphonic patches.

This is an incredibly deep synthesizer, providing powerful sound shaping and generation with a rather unique interface from the digital patch matrix. It integrates well with external controllers or modulation sources, or can be used all on its own. Syntrx rewards exploration and can result in losing hours of your time noodling around in this synthesizer ecosystem.