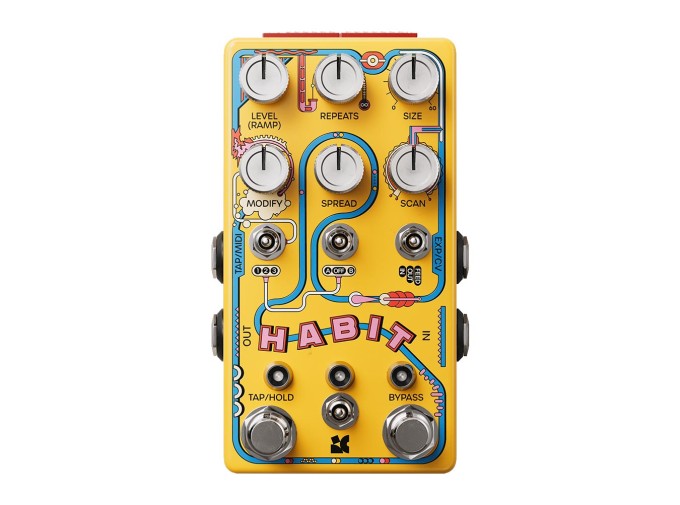 Perhaps Blooper's long-lost sibling, Chase Bliss Audio's Habit is a stylish and multi-layered delay pedal with onboard memory and looper-like functionality. Like most Chase Bliss pedals, Habit is stacked with brilliant features that blur the lines of traditional effect formats by taking its delay archetype several steps beyond its typical boundaries...creating something much more fluid and breathing.

However, just looking at the fantastic delay, Habit offers quick and easy access to a fantastic digital echo with infinite feedback, ranging all the way up to 60 seconds of delay time. Easily tap tempo your delays via the onboard footswitch and loop the current echo buffer while holding the bypass button, without writing new audio into the delay loop.

These days, it is not uncommon for delay pedals to incorporate some form of looping, but Habit takes it to a whole new level with its three-minute memory section to reintroduce the past throughout the rest of the pedal. Initially, the buffer will record and playback your last moments with no worry of overdubbing, and the only way to reset the loop is to disengage and re-engage the effect. Only when you engage the Scan parameter will Habit play back from its memory, setting the memory's header position with options to introduce a second playback head via the Spread control. Habit's memory may be routed through the echo and modifier section or can run completely dry, and memory can overdub and even listen while the effect is disengaged when the rear Collect and Always dip-switches, respectively, are engaged.

Borrowing from Blooper's fantastic array of modifiers, Habit can choose from one of six time and pitch-warping effects that can be set to be fed back into the echo or be used as a final effect. A third feedback option known as FEED can be selected to completely connect the output back into the input, feeding the memories back into themselves for some massive and convoluted delay lines and loops. In classic Chase Bliss Audio fashion, controlling Habit is easy-peasy thanks to the expression/CV input as well as the tap-tempo/MIDI input for modulating a variety of external sources. With tons of more hidden features and loads of parameter combinations and routings to choose from, Habit provides a unique and memory-shifting delay to your pedal board.