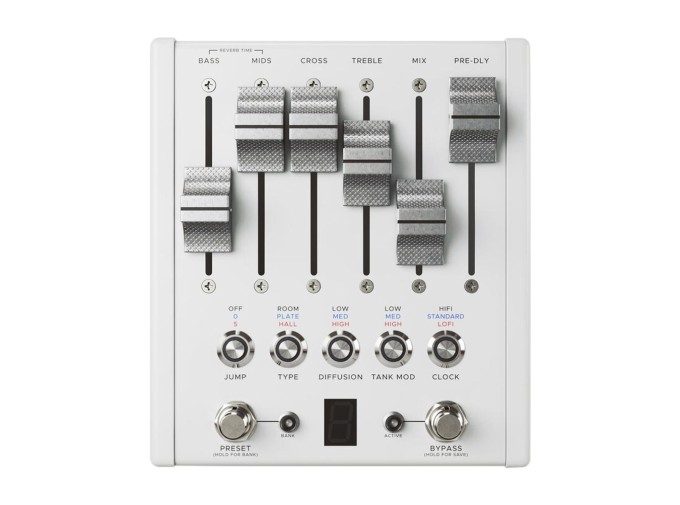 For the next entry in the Automatone series, CXM 1978 sees the union of Chase Bliss Audio and Meris, two of the most compelling pedal makers on the scene right now, pouring their heart and soul into an expressive reverb pedal. Like the Preamp MkII, the CXM 1978 doesn't exactly look like your typical guitar pedal, boasting a set of six faders and shiny arcade buttons instead of the knobs and switches you would typically see. But under the hood, the faders are actually motorized, and will instantly jump back to recalled preset settings and respond in real-time to external control sources.

Underneath the sophisticated hardware lies a dynamic reverb engine which is eagerly awaiting sonic sculpture. While it certainly draws inspiration from the Ursa Major Space Station, over 40 years of advancement in DSP developments allows for the CXM 1978 to explore even more realms of sound than the original could. You won't find a typical decay setting on the panel, because the properties of the virtual reverberant space are defined by the relationship between various EQ controls. Bass and mid frequencies have their own decay times set by dedicated sliders, with the frequency crossover point set by the aptly named Cross control. The Treble control can be thought of as a dampening or absorption control for the reverberant reflections, affecting the decay time in how brightly sounds continue to be heard. Rounding out the faders are controls for Mix and Pre-Delay, respectively affecting the dry/wet balance and delay time before initial reverb reflections.

Aside from the unique EQ-based approach to shaping the reverb, even more of the magic of the CXM 1978 can be found in its arcade button settings. Type switches between Room, Plate, and Hall algorithms, each transforming your sounds with different flavors of ambience and presence. Diffusion imparts various levels of smearing to the initial reflections of the reverb, with the High setting interacting with Pre-Delay control, applying flanging and dense textures at low settings, and distinct echoes at higher settings. Tank Mod applies modulation to the virtual tank's feedback and delays, ranging from subtle chorus and vibrato to fast, rotary speaker-like textures. Clock determines the sample-rate, bit-depth, and overall length of the Pre-Delay control, running the full spectrum from modern and clear to lofi and degraded. Finally, Jump is a handy instant preset change control, allowing instant recall of either preset zero or five from any other preset when enabled.

A hallmark of any Chase Bliss and Meris pedals is the abundance of external control methods, and CXM 1978 is no exception. The pedal offers a full-sized 5-pin MIDI input, and every parameter responds to dedicated control change messages, even updating the position of the motorized faders in real time. If MIDI isn't your thing, there's also a standard expression pedal input, as well as an auxiliary input for use with the Meris Preset Switch, which can jump between favorite presets or activate some neat hidden features, like freezing the reverb buffer or abruptly cutting off the decay tail.

The CXM 1978 brings the best of both worlds from Chase Bliss and Meris. With professional-level audio quality from its 32-bit converters and balanced stereo inputs and outputs, you can be certain that your reverb is starting from a place that is pure and pristine. Charming and nostalgic, CXM 1978 is a reverb pedal that encourages and rewards exploration by guitarists, synthesists, and producers alike.