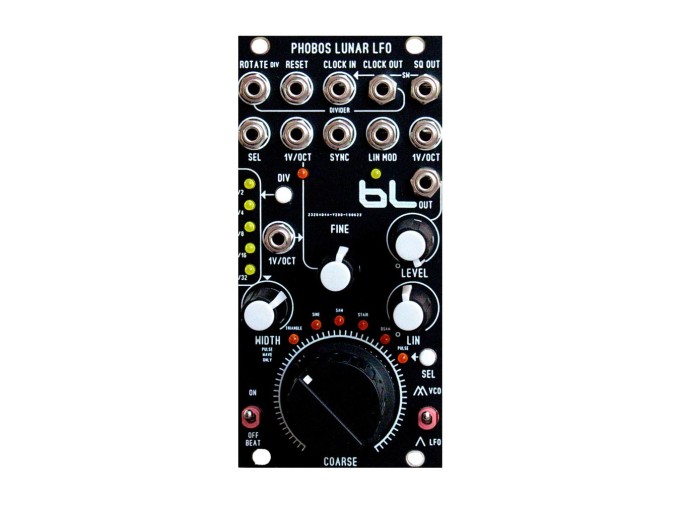 The Blue Lantern Phobos Lunar LFO V2 is a complex phase locked loop-based LFO with extensive modulation, multiple waveforms, and even a clock divider. It extends up well into audio frequencies, making it great for use as a VCO or as a low-frequency modulation source.

It has a selection switch and CV input for waveforms which include triangle, sine, saw, stair, D-saw, and pulse. The stairstep generated waveform sounds like a quantized, stepped ramp waveform and runs at half the frequency of the LFO. The pulse waveform has a width control to determine the duty cycle.

There are three 1V/Oct octave inputs, which track over four octaves when used as an audio oscillator. Additionally, there is linear FM with attenuator, as well as hard sync that resets the oscillator waveform. There is also a scalable output for controlling the depth of modulation on modules that might not have CV input attenuators. The square wave output additionally clocks a clock divider which can also be clocked by an external source. The clock divider has five different clock divisions selectable by button or with CV. It can be clocked into audio rate, at which point it will act like a subharmonic generator.

The Phobos Lunar LFO is an out of this world modulation source, providing deep control and modulation of its parameters.