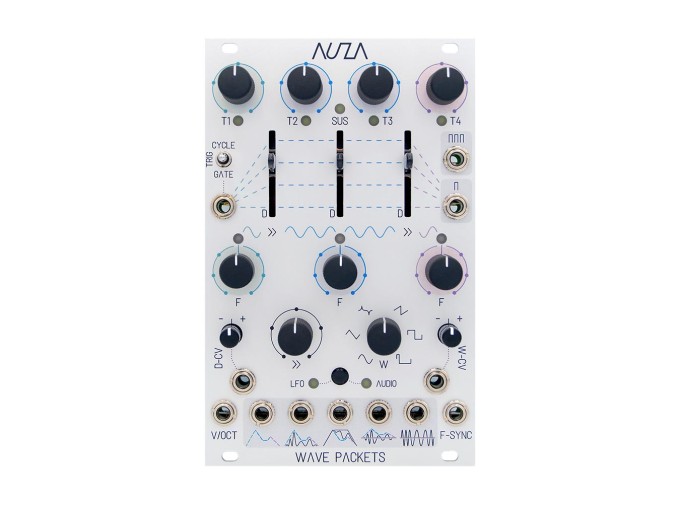 Wave Packets from AUZA is a powerful, multi-purpose Eurorack module designed to provide you with a variety of useful signals ranging from envelopes and LFOs to audio rate oscillations. With five simultaneously usable outputs—2 bipolar, and 3 unipolar—this module is ready to spread its patch-cable tentacles into all directions within your system, operating both as a controller and sound generator at once.

"Wave packets" are specified as time-limited signals sculpted in four dimensions: time, depth, frequency, and wave shape. Combined with a 24-bit wavetable oscillator design, this creates a unique platform for a seemingly endless variety of complex modulation, and audio waveshapes.

"Wave packets" are activated via three main excitation modes: trigger, gate, and cycle, as well as additional pingable-stages cycle, and free-running modes. The general contours of the waves are then established via three "depth" sliders, while waveshape, glide, and three frequency controls define how the oscillations unfold over time. Thus there is constant interaction between the five waveform outputs that can be construed from left to right as pure contour, unipolar wave, resonating contour, capsulated oscillator, and pure oscillator. Because control rate and audio rate wave packets are available simultaneously, the module is incredibly receptive to creative self-patching, hence offering a whole realm of novel sonic discoveries via experimenting with patching some outputs to its own parameter inputs.

While there are a number of modules capable of transitioning from modulation to audio source either smoothly or via a switch, none are as adept at being both at the same time as AUZA's Wave Packets. Whether you are looking for a new way to sculpt complex evolving control patterns, or need a new richly-flavored oscillator in your system—this module promises to be exactly the right solution.