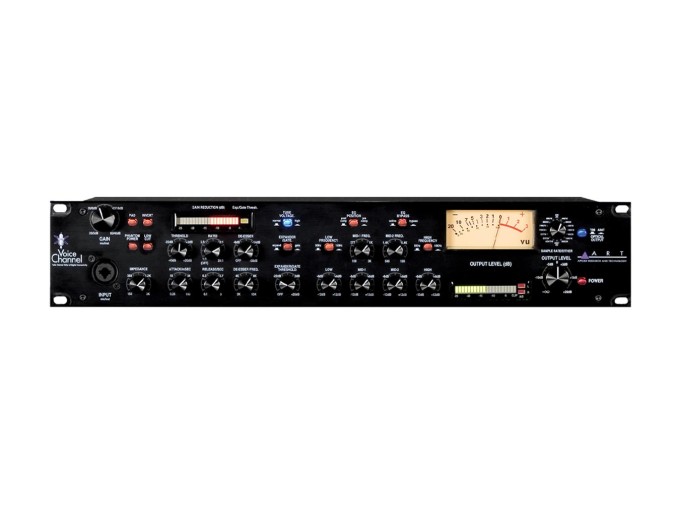 Voice Channel by ART is a full-blown, rack-mount channel strip, functioning as a preamp, dynamics manager, and EQ with an abundance of analog and digital outputs for seamless integration into any audio environment. The preamp's main attraction is certainly its Class-A design centered around a 12AX7A vacuum tube, helping to impart the warmth that tube preamps are known for into your audio. For further versatility, the preamp makes use of ART's variable impedance control, offering some flexibility in tuning your mic's frequency response to be just right for whatever instrument you may be recording. There's also a switch to increase the tube's plate voltage, increasing headroom and further reducing distortion and noise for ultra-clean performance. But if you're looking for saturation, keep this switch on "Normal" and drive the tube with higher input gain.

Following the preamp is a flexible dynamics processor, capable of compression, limiting, de-essing, and more, as well as four-band, semi-parametric EQ. Regardless of if you prefer your EQ before or after your compressor, the Voice Channel gives you the option of both via a convenient switch. The base amount of compression can be set with the Ratio and Threshold controls, and a De-esser is available for further control over frequencies from 2k to 15kHz. Attack and Release controls define the contour of compression. There's also a built-in Expander/Gate, providing useful ways to reduce some background noises which may be sneaking in with your incoming audio. As for the EQ, the low and high bands are shelving curves with two selectable frequencies, while the two Mid bands offer variable frequency controls. Each band can boost or cut by 15dB.

With all these features for shaping your audio, the Voice Channel has a few other tricks up its sleeve to make it a worthy member of your studio. In addition to its flexible array of analog outputs, there's also a host of digital outputs including USB, optical, and AES/EBU. Dependable and versatile enough for just about any audio application, the Voice Channel from ART is a highly capable channel strip ready to drop into your studio.