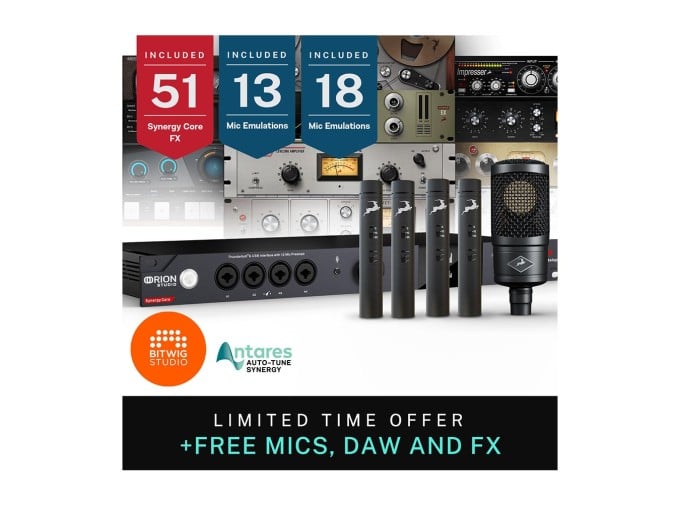 This limited edition bundle contains Antelope Audio's Orion Studio Synergy Core audio interface, plus an Edge Solo and a whopping four of their Edge Note modeling microphones and suite of software. This loaded deal is all available for the normal retail price of the interface itself, so don't wait too long to take advantage of this promotion!

The Antelope Audio Orion Studio Synergy Core is a versatile and powerful audio processor and interface which provides a wide range of connectivity and incredible processing power. It allows you to offload the processing of resource-intensive plug-ins from your computer for improved performance and stability.

The core of the Orion Studio Synergy Core is comprised of six DSP and two FPGAs, bringing together the best parts of both technologies. These allow it to run 32 FX channel strips at 8 FX slots apiece for a total of 256 FX instances at any sample rate and with virtually no latency. It comes with 50 Synergy Core FX which include amp modeling, reverb, EQ, compression, and utility effects. The Auto-Tune Synergy was designed for the Synergy Core platform and features live pitch correction, automatic key and scale detect, fully adjustable retune speed, and the ability to humanize performances. Additionally, the classic mode captures the distinctive sound of auto-tuning found on many hit records.

In addition to the processing capabilities found on the unit, it features a wide range of connectivity. The 12 transistor-based discrete preamps provide incredible depth and clarity. The Auto-Tune and 3D microphone modeling engine allow Antelope Audio's modeling microphones to truly shine. You also have the ability to bypass the preamps and record directly to the ADC to allow for a different flavor of audio recording.

There are 16 line outputs over D-SUB 25 connectors, as well as monitor, reamp, and stereo headphone outputs. The two ADAT inputs and outputs allow for 16 channels of digital audio. Antelope Audio's software control panel allows for comprehensive control of mixing, routing, and effects with the ability to save and recall presets. With unmatched performance from the DSP and FPGA processing, 12 flexible inputs with incredible preamps, a wide range of outputs, and the ability to run 256 FX instances at the same time, the Orion Studio Synergy Core is in a class of its own.