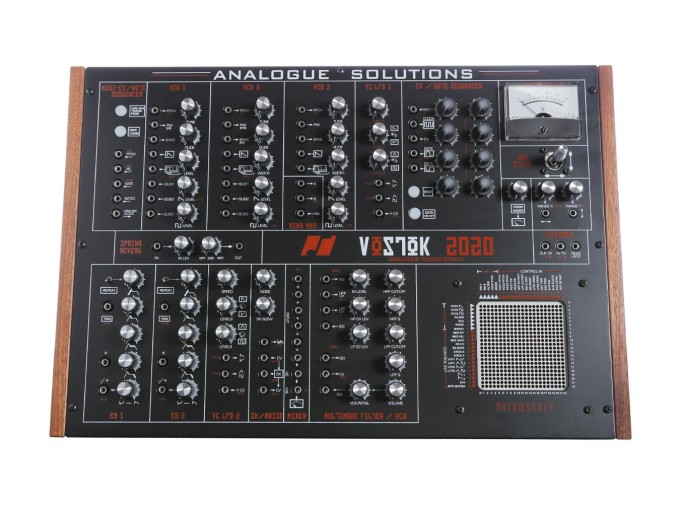 The Analogue Solutions Vostok 2020 is a semi-modular synthesizer that brings together pin matrix and patch cable connections. It's capable of a huge range of sounds and offers an intuitive interface. Connections between modules can be made with patch cables or by using the pin matrix. The pin matrix allows you to create connections using shorting pins and not have to worry about a mess of wires, much like in classic EMS synthesizers like the Synthi and VCS3. However, not all connections are included in the pin matrix, so some patching is required to access every function of the synthesizer.

The three oscillators each have saw and pulse wave outputs. Inputs include pitch, pulse width, and a sync input. The oscillators also have an internal glide control, adding portamento or sliding between notes. Oscillators 1+2 each have three sub-oscillator outputs, pitched one, two, and three octaves below the base frequency. The ring modulator has two inputs and can be used to create metallic and unexpected sounds. Varying the pitch or amplitude of the input signals will affect the overall character of the resulting sound.

The two VCLFOs feature sawtooth, ramp, square, and triangle waves, although only two of these waves are active at a time. The frequency of the LFOs can be modulated and the waveform outputs include level controls to set the depth of modulation. The two envelopes are ADSR envelopes that can loop and have variable attenuverting level control. The Vostok also features a noise source and sample and hold, allowing for random voltage generation. The S+H also features a slew control, allowing for glide between voltage levels. The joystick outputs two CV signals, one for the X axis and one for the Y axis. These have controls to set the overall range of CV.

The MIDI to CV converter converts MIDI notes to 1V/oct CV notes, gate signals, and velocity modulation CV signals. Additionally, when MIDI notes are entered, they are automatically added to the note sequencer. Up to 16 notes can be stored and played back. After 16 notes, the note sequencer will loop back around and start to overwrite the data. To play the sequencer, just apply a gate source to the clock input. The other sequencer is an eight-step analog CV and gate sequencer. It features a CV output, set by the knobs, and both a gate output and an inverted gate output. These two gate outputs flip flop, with one high while the other is low. Gates can be turned on and off with the associated button. A hidden mode allows the inverted gate output to act as a tuner, outputting a steady tone at A440Hz.

The filter section features both high pass and low pass filters. They are 12dB diode ladder filters and are configured a bit like the filter section on a Korg MS-20. They can be used together to create a bandpass filter. The filter's resonance is somewhat dependent on the input signal level. The resonance goes into self-oscillation at higher resonance settings. The VCA features an initial control to set the level of the signal, and a CV input to further affect the loudness of the signal. The mixer can accept up to six audio or CV signals and has both non-inverted and inverted outputs. The output of the mixer is hardwired to the input on the signal meter which offers a visual display of voltage level. The spring reverb features three real springs and controls for input level and dry/wet mix.

With inspiration borrowed from classic EMS synthesizers, the 2020 edition of the Analogue Solutions Vostok is a fully fledged analogue synthesizer. It offers all the building blocks necessary for deep sonic exploration and is capable of everything for your standard monosynth bass lines to far out experimental soundscapes and everything in between and beyond.