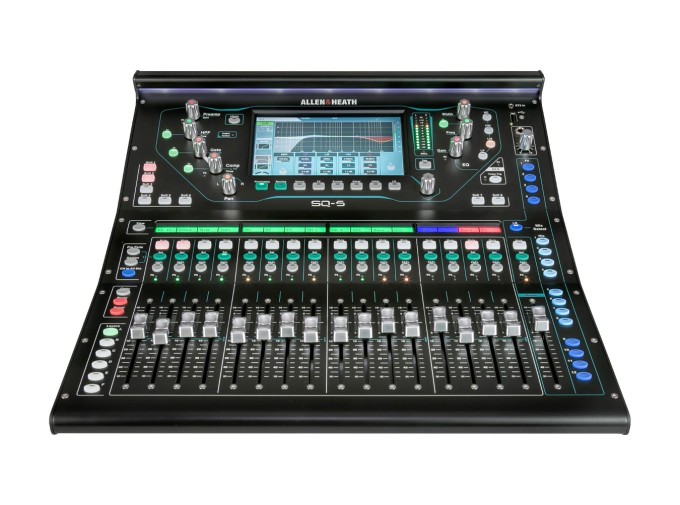 The Allen and Heath SQ-5 is a powerhouse of a digital mixer that can handle up to 48 inputs and gives you total control over your mixing environment. It's powered by Allen & Heath's powerful XCVI 96kHz FPGA engine that delivers ultra-low latency and high performance. Featuring 16 XLR inputs with on-board preamps and expansion for up to 48 total input channels, the SQ-5 provides ample connectivity for large events or bands. Every input features a high pass filter, four-band EQ, gate with sidechain and filter, and Peak/RMS compressor. In addition to these, the SQ-5 features eight stereo FX engines with dedicated return channels. The Automatic Mic Mixer functionality makes the SQ-5 a great choice for TV shows, panels, or conferences.

The center features a high resolution 7" capacitive touchscreen, bordered by illuminated encoders that work together for a seamless mixing and mastering experience. Channels and mixes can be assigned to any strip. Channel strips feature naming and color coding and can be customized to fit your mixing requirements. Record directly to a USB drive with the built-in multitrack recording that captures audio at 96kHz with no drivers or sound cards to configure.

Additionally, Allen & Heath have developed two companion apps for the SQ series. These include the SQ MixPad for iOS, Android, and Mac OS for wireless control of mixing functions, as well as SQ4You, a personal monitor mixer for iOS and Android devices. Whether you're mixing for bands, houses of worship, or a conference, the SQ-5 is a powerful choice, providing deep possibilities for mixing, mastering, and even recording.