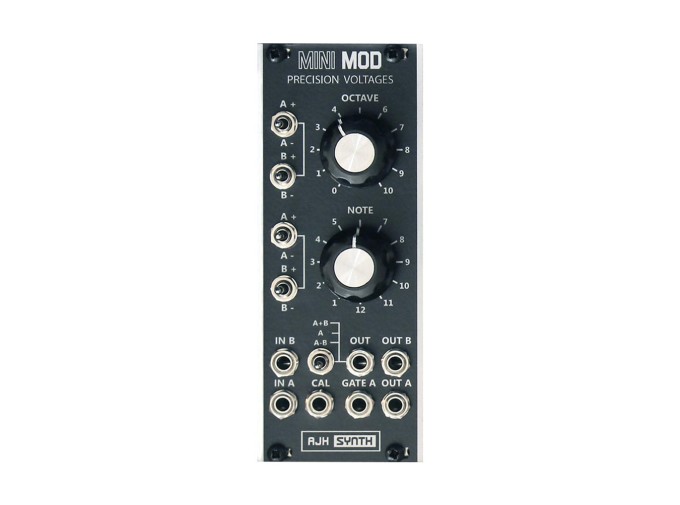 AJH Precision Voltages is an extremely accurate voltage source and precision adder, perfect for keeping everything in a patch in tune. Eurorack uses the one volt per octave (1V/Oct) standard where one volt corresponds to one octave on a standard western 12-TET musical scale. A semitone is equal to 0.0833V or 1/12th of a volt.

On the AJH Precision Voltages module, the ten-position octave switch adjusts voltage by 1V (one volt) while the 12-position note switch adjusts by 0.0833V. There are two inputs, labeled A and B. With nothing plugged into the inputs, the module acts as a precision voltage source, providing a constant voltage level at the channel's output. There are two sets of two switches by the octave and semitone rotary switches which have three positions. These select if the octave or semitone rotary switches are added to or subtracted from the incoming voltage, or they can be used to bypass the control, letting the signal go unaffected.

A gate input is also present, which can be used to turn on or off the octave and semitone settings for channel A. Combination mode allows you to add channel B to channel A or subtract channel B from channel A. Additionally there is a calibration output, which can even by used in lieu of more expensive lab equipment to calibrate VCOs. It responds to the octave switch and is accurate to 0.5mV in the 0 to +10V range and accurate to 1mV from 0 to -10V. AJH even uses a version of this circuit to calibrate their MiniMod VCOs. The Precision Voltage is an extremely useful utility module, and while it looks boring, it can come in handy in many situations when keeping everything in tune is a priority.